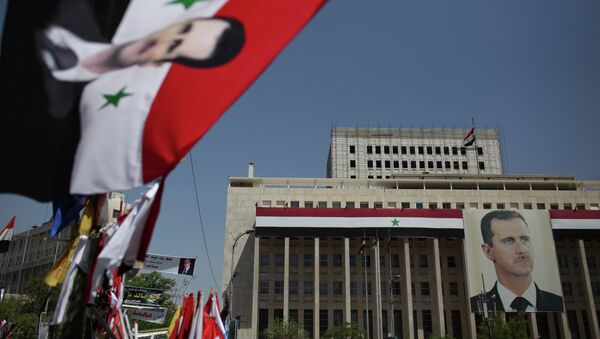 © Sputnik / Valeriy Melnikov
/
Go to the photo bank
Subscribe
The West started to realize the pointlessness of its anti-Assad ultimatum, Russia's top diplomat said adding that the reconciliation is impossible without the Syrian president.

"Our Western partners have realized the pointlessness of that line, that ultimatum, basically, that if Assad leaves, all problems will be solved," Lavrov told Radio Rossii.

"I think that [French President Francois] Hollande's phone call to [Russian President Vladimir] Putin following the heinous terrorist attacks in Paris, his proposal to coordinate our efforts, and the [Russian] president's reaction, willingness to do so as allies — all this shows that sensible politicians are setting aside secondary issues and focusing on the main priority: fighting the Islamic State's attempts to win over positions across the globe," the minister said.

The fate of Bashar Assad has been a stumbling block in the Syrian peace talks, with the United States and its allies insisting that he must step down, and Russia saying it is for the people of Syria to decide on his future.

Solving the armed conflict in Syria and achieving peace is impossible without the participation of Assad, the Russian foreign minister said.

"They said [in the West] that his days are numbered, but these days continue five years later, and all the prognoses by our Western and other colleagues claiming that the people will rise and overthrow him, are not coming true," Lavrov told Radio Rossii.

"This means only one thing: Assad reflects the interests of a significant part of the Syrian society, and therefore a peaceful solution without his participation cannot be found."

000000
Popular comments
There is one problem that France might not be too keen on to solve though. That is Wahhabism and in every sense, the retarded, medieval and pre-ironage monarchies in the Gulf, Saudi Arabia, Qatar & UAE as Daesh main sponsor´s and "spiritual" leaders. If those and their death cult ideology wahhabism are not dealt with, their main export beside oil, cutthroat terrorists, will be coming back, either for their own purposes or for israels and USAs in the region. France is bought by the Saudi´s and they want bang for their bucks, not what France is pretending to do now