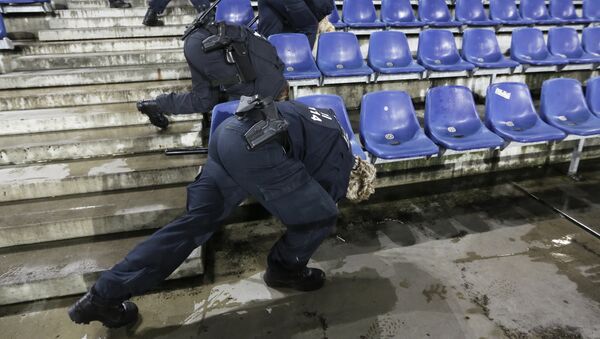 © AP Photo / Markus Schreiber
Subscribe
International
India
Africa
The terrorists planned to blow up a stadium and the central railway terminal in Hanover during a Germany-Netherlands friendly game, a German newspaper reported on Thursday, citing a secret document obtained from an unnamed source.

Tuesday’s international friendly between Germany and the Netherlands in Hanover was canceled by German police less than two hours before kickoff after a “suspicious object” that could cause an explosion was found at the stadium.

However, at a press conference held later in the day Germany's interior minister Thomas de Maiziere confirmed that contrary to earlier media reports no explosives had been found at the stadium.

According to the secret information obtained by the daily newspaper Bild, a group of terrorists planned to detonate several explosive devices during

Tuesday’s game at the stadium and  elsewhere in the city and then another one at the central railway station after midnight.  The terrorist ringleader allegedly intended  to be at the stadium and film it all. The explosives were to be smuggled in stashed inside an ambulance.

“And still, the hard fact is that, according to official information, no explosives were found either at or near the stadium,” the newspaper wrote in conclusion.