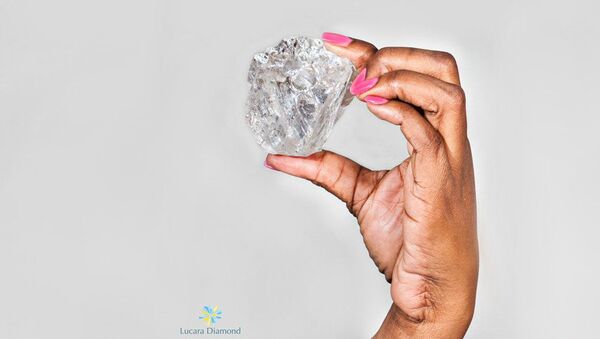 The world's second largest diamond has been discovered in the Karowe mine in Africa. The 1,111 carat gem is the biggest stone ever recovered in Botswana and the largest find for more than a century.

William Lamb, President and chief executive of the firm said in a statement:

"The significance of the recovery of a gem quality stone larger than 1,000 carats, the largest for more than a century… cannot be overstated."

This historic diamond recovery puts Lucara and the Karowe mine amongst a select number of truly exceptional diamond producers.

Wish to see a COLOSSAL diamond? Look no further. @LucaraDiamond recovers 1,111-carat #diamond, that too a #TypeIIa! pic.twitter.com/zpfB9k2zwv

The last significant gemstone found in Africa dates back to 1905, when the 3,106 carat Cullinan diamond was discovered in South Africa. Cut into nine separate stones, many bestow the British Crown Jewels.

One particular diamond adorning a crown worn by British monarchs has recently made the headlines after a group of Indian businesses and Bollywood stars decided to begin legal proceedings against the British Government to recover the jewel in the crown given to Queen Victoria, following the British annexation of the Punjab in 1849.

The Koh-i-noor diamond or 'Mountain of Light' when translated is "one of many artifacts taken from India under dubious circumstances," said David de Souza from India's leisure group Titos.

The diamond is currently on public display at the Tower of London. According to legend, the stone can only be worn by a God or a woman — and if a man wears it, he will meet an unfortunate end.

Meanwhile, the destiny of the world's second largest diamond isn't that clear-cut either. But, a spokesman for Lucara told Sputnik:

"The stone's fate will be for it to be sold at a private auction. It could be sold as a tender with other precious gems, or separately, because it is so exceptional."