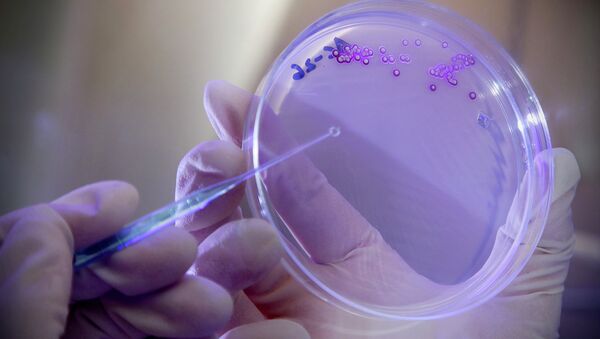 © Flickr / Oak Ridge National Laboratory
Subscribe
The world is nearing the end of the antibiotic era, scientists have warned after discovering bacteria resistant to the drug of last resort, used when all other treatments are helpless.

A new gene, dubbed MCR-1, has been uncovered which enables bacteria to be highly resistant to colistin, from the group of polymyxins, the last line of antibiotic defense of modern medicine, according to a new study published in the Lancet Infectious Diseases.

"These are extremely worrying results. The polymyxins [colistin and polymyxin B] were the last class of antibiotics in which resistance was incapable of spreading from cell to cell," lead researcher Professor Jian-Hua Liu, from the South China Agricultural University in Guangzhou, was quoted as saying by RTE News.

Giant Viruses Frozen for Millennia in Siberian Permafrost May Wreak Havoc
Chinese and British scientists reported they have found a strain of Escherichia coli, a gram-negative bacterium, in pigs, raw pork meat, and in a small number of patients in China. The report showed resistance in a fifth of animals tested, 15 percent of raw meat samples and in 16 of 1,632 patients.

Until recently, gram-negative bacteria, resistant to antibiotic treatment, could be treated with polymyxins. In 2012, the World Health Organization designated colistin as critically important for human medicine. It is likely resistance emerged after it was overused in farm animals in China.

There is also evidence that the mutation has spread to Laos and Malaysia.

The newly-discovered gene can easily transfer between bacteria, making them highly resistant to treatment. Scientists also warned that the MCR-1 gene has the potential to spread into other epidemic pathogenic bacterial species which can cause a variety of diseases from pneumonia to serious blood infections.

The gene was found on plasmids, double-stranded DNA molecules which can replicate independently. Now, the gene is already attached to plasmids and cannot be killed with antibiotics.