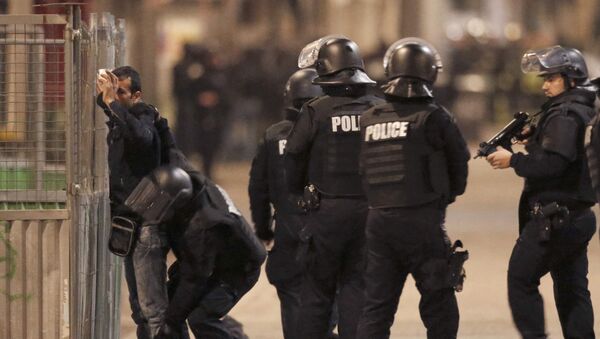 French police special forces have killed three suspected terrorists during a special operation in the Parisian suburb of Saint Denis, and arrested five others, according to local media.

One of the suspects managed to escape, French RTL radio said.

Seven or eight alleged grenade explosions were heard near the place where the two suspects are hiding, according to BFMTV.

A group of 50 military has been deployed to facilitate the operation.

"A woman with an explosive belt that has not been activated was shot," two RTL radio security correspondents reported, corroborating previous reports of three deaths and two arrests in the raid.

The three-hour siege reportedly targets Abdelhamid Abaaoud, the alleged mastermind of the terrorist acts, previously thought to have been in Syria, as well as Salah Abdeslam and a potential ninth assailant. Abdeslam is thought to have rented a vehicle used in the massacres.

I can only hear gun shots at #SaintDenis #police shouting "reculer "

Witnesses say a police operator told on the phone a police operation is ongoing. There are also reports specifying that the local SWAT team RAID is at the scene. "The gunfight in Saint-Denis is related to the manhunt of [Paris attacks] perpetrators," the iTele TV channel reported. An official confirmation is yet to follow.

The Stade de France stadium is located in the Saint Denis suburb.