Cooperation With Russia Against Terrorism 'Hollande’s Only Option' 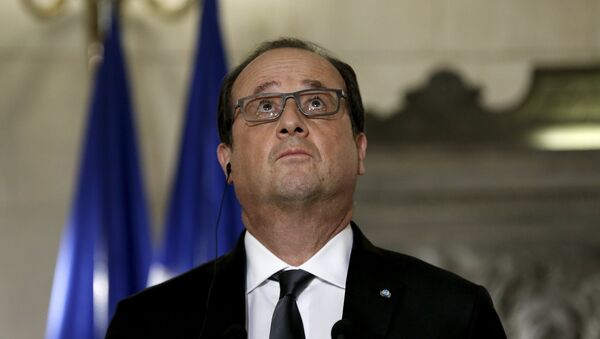 Now, cooperation with Russia against terrorism is the only option for French President Francois Hollande, Leonid Ivashov, head of the International Center for Geopolitical Analysis, said.

France Intensifies Anti-Terrorism Cooperation With Russia
Military cooperation between Russia and France is dictated by a common terrorist threat and common military goals. In order to achieve the goals, a joint staff group may be established, he said.

On Tuesday, Russian President Vladimir Putin ordered Defense Minister Sergei Shoigu and Chief of General Staff Valery Gerasimov to develop together with their French counterparts a joint plan of action in Syria on the sea and in the air.

"The tragedy in Paris could change the French foreign policy. Hollande is not de Gaulle, of course. He will not withdraw France from NATO. However, France may take some independent steps in bilateral relations with Russia. Hollande would try to regain the right for an independent policy toward Russia," Ivashov told RIA Novosti.

Otherwise, Holland may go down in history as the worst French president due to a number of serious flaws in his foreign political course.

"Hollande is backed by public groups and a political party. It’s obvious he will not like being the worst president in French history. He has made some serious mistakes in his foreign policy, including anti-Russian sanctions and the breach of the Mistral deal. Some say the Paris tragedy was also caused by his mistakes. Being pressured by the US, Hollande is damaging France both as a nation and as a society," he underscored.

Moscow Hopes Other Countries to Cooperate With Russia in Fight Against ISIL
Ivashov added that now Hollande would take "definite steps toward cooperation with Russia", particularly in the fight with against terrorism.

"That would be the best option for Hollande to prove his resolute and independence," he said.

According to Ivashov, political cooperation between Russia and France would turn into a military alliance against terrorism.