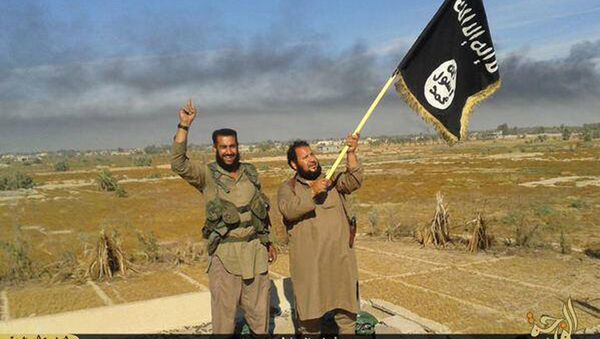 © AP Photo / Militant website via AP, File
Subscribe
It’s to time for the West to realize that Russia isn’t the enemy and stop focusing on the issue of Syrian President Bashar al-Assad; instead, the EU should focus on crushing ISIL, the French newspaper L’Opinion reported.

In the aftermath of the tragic events in Paris over the past weekend, Europe should stop worrying whether or not Russia supports al-Assad, but should instead join the fight against ISIL in the Middle East to crash jihadists like "cockroaches," the newspaper said.

"Damn Europe, now you too have victims! But it's not the time to panic," the L'Opinion article said.

Assad is Not the Enemy of France, ISIL is - Hollande
By supporting Arab Spring movements across the Middle East and North Africa, Western leaders let "the Pandora Box — the clash of civilizations — to happen" and now nobody knows how to close it putting all the monsters back into the box, L'Opinion said.

There only one thing left that the EU could do right now, that is to fight Islamic extremism.

"If cockroaches invade a house and one can't live in it, you need to carry out a radical disinfestation. Whether you like it or not we need to send our forces to Syria, Libya and put them back in Iraq, get every terrorist out of their house and finish up this operation," the newspaper said.

If the EU spends another few years trying to solve insignificant issues, such as the future presidency of al-Assad or the effectiveness of Russian airstrikes in Syria, the world would eventually lose to Islamic fundamentalism and Europe risks to "lose its freedom and democratic ideals in several years," the French newspaper said.

It's a similar situation to World War II. If the Allies didn't unite in time and fought against Nazism together, we'd probably still live under the reign of the Third Reich, the newspaper concluded.