UK's Cameron Pushes for Syria Airstrikes With or Without UN Mandate 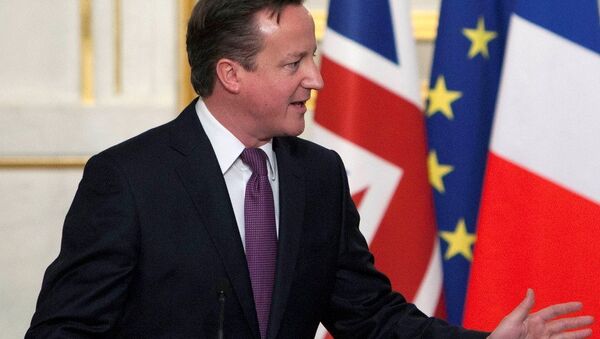 © AP Photo / Thibault Camus
Subscribe
UK Prime Minister David Cameron has reinforced his push for UK military intervention against ISIL targets in Syria, saying he would outline a "comprehensive strategy" for airstrikes, regardless of whether the UK had permission from the UN.

Speaking in the House of Commons, Cameron launched a renewed push to extend British anti-ISIL activity into Syria, signaling that he would ask MPs to vote on the matter before Christmas.

PM: What matters most of all is that any action we take over Syria would be legal and help protect our people and our country #PMQs

"We must ask ourselves if we really are doing all we can be doing, all we should be doing, to deal with the threat of ISIL and the threat is poses to us directly," the prime minister said in an earlier statement.

The renewed push for action in Syria comes despite opposition from Labour leader Jeremy Corbyn and the UK cross-party Foreign Affairs Committee, which recently released a report saying British airstrikes in Syria would only serve as a "distraction" and wouldn't help with devising an overall approach to defeating ISIL.

PM: We play a leading role in making sure that the supply of money and weapons to ISIL is cut off #PMQs

"I believe part of that is taking action against ISIL."

There are also lingering questions surrounding the legality of any potential UK bombing campaign in Syria, given that Britain doesn't have a UN mandate and hasn't sought the permission of Syrian leader Bashar al-Assad.

PM: The best way to beat terrorists is to show that we will not be cowed #PMQs

Cameron refused to say whether he would push for a UN mandate on Syria when asked by MPs, adding that while it was "preferable" to have United Nations approval, he criticized Russia for having different goals in regards to Syria.

Britain, along with representatives of the US, France and Saudi Arabia agreed to work with Russia and Iran on the matter of a Syrian peace deal during a peace conference in Vienna on Saturday.

Despite coming to a broad agreement to work together to defeat ISIL and establish a credible political solution in Syria, there were still many differences in opinion between major international and regional powers.

"If they [calls for military intervention] are vetoed or threatened to a veto, my job… is to do the right thing to keep the country safe," he said, while not confirming whether he would pursue a UN veto before calling for British military action against ISIL targets in Syria.

PM: We should all acknowledge the bravery of the French police in dealing with this very challenging situation #PMQs

Russia has long called for the West to support the Assad government's fight against jihadist groups, arguing that arming and supporting other "moderate" rebel forces would merely splinter and prolong the conflict.

The chances of MPs backing Cameron's call for Syria intervention has been seemingly boosted after some opposition Labour lawmakers indicated that they would be willing to defy their own party leadership — who have opposed the idea of Britain extending military intervention in Syria without a UN mandate — and back Cameron's plans.

Labour's Mike Gapes said Cameron's "content and tone spoke not just for the Government but for the country," while fellow Labour MP Ian Austin said that he agreed "with everything the Prime Minister said about Syria and about terrorism," as more opposition MPs publicly criticized leader Jeremy Corbyn's response to the matter.

However, Cameron himself is wary of tabling a bill unless he is confident of winning, given his embarrassing 2013 defeat, when the Labour party and others within his ruling coalition voted against the government's plans to undertake air raids in Syria.

Many MPs are also very concerned about the legal issues surrounding overseas international intervention following the UK's part in the Iraq invasion of 2003, which many believe was in breach of international law.