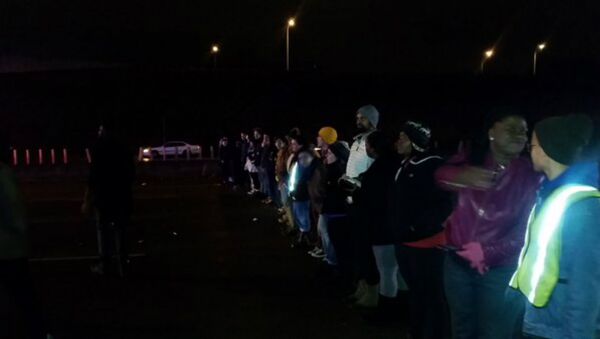 © Twitter/Black Lives MPLS
Subscribe
The officers who killed an unarmed black man in Minneapolis on Sunday, leading to a wave of massive protests, have been identified.

Officers Mark Ringgenberg and Dustin Schwarze, who have each been with the Minneapolis Police Department for 13 months, were the officers who fatally shot 24-year-old Jamar Clark.

Schwarze previously worked with a department in the Minneapolis suburb of Richfield, where in 2011, a federal complaint was filed against him over a 2009, “malicious campaign of threats, harassments, random searches and arrests.”

The man who filed the complaint, Billy McCoy, alleged in the complaint that the officer had “falsified police reports, and conspired with a private citizen in a continuous and unbroken sequence of unlawful searches, intimidation and phone threats” in order to attempt to force him into becoming a police informant, the Guardian reported. The complaint was settled out of court, and details of the case were sealed.

Witnesses have claimed that Clark was handcuffed when he was shot in the head above his left eye, though the police have maintained that their initial investigation has found that he was not. Handcuffs were found at the scene, but no explanation has yet been given on where they were or why.

“He was handcuffed. He wasn’t struggling,” Lisa Hoskins, who said she witnessed the shooting from the balcony of her apartment directly across the road, told the Guardian on Tuesday. “They told him to back up off the car, then they rushed him, put him in handcuffs,” she said. “That’s when you heard the ‘boom’.”

The officers were not wearing body cameras, and the police have stated that videos which they have obtained do not completely capture the shooting.
On Monday evening, 51 people were arrested in Minneapolis after shutting down a busy interstate for over two hours in protest after Clark was removed from life support.

The Minneapolis Police Department has placed the two officers involved on paid leave and has requested a federal investigation into the incident. The FBI has said that it will be investigating the case, according to the Associated Press.