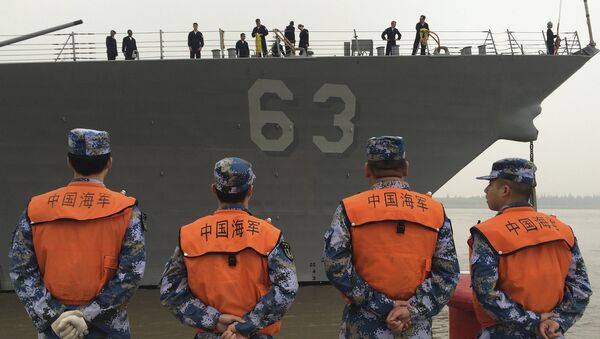 © AP Photo / Paul Traynor
Subscribe
Despite tensions between Washington and Beijing over Chinese sovereignty claims in the South China Sea, a US warship docked in Shanghai Monday ahead of planned drills with the People's Liberation Army Navy.

The USS Stethem, a guided missile destroyer, is scheduled to take part in drills that include communications exercises and a surface rescue simulation, Defense News reported.

The ship's commanding officer, Harry Marsh, said the visit is intended to "build mutual trust" between the US and Chinese navies. US sailors, he said, would learn about their counterparts' "maritime experiences, so that when we operate at sea we can do it safely, and we understand what they are doing and what we do."

It is the first US port call in China since Washington last month sent a warship near artificial islands being built by Beijing in the South China Sea. Washington says the construction projects present a threat to freedom of navigation in the region, where several countries have overlapping territorial claims.

Beijing denies those allegations, saying they are a pretext for the US to flex its muscles as it "pivots" to the Asia Pacific.

The disagreement has become a major point of friction between the two countries, and threatens to become an issue at this week's Asia Pacific Economic Cooperation forum in the Philippines, where Beijing says it should not be discussed.

"Countries may have some disagreements, yet our navies are able to operate safely at sea," Harris said, downplaying the tension. "We have a very good relationship with the Chinese navy at sea. It’s a cordial relationship."

The Stethem's visit to China had been planned before the USS Lassen sailed near the Spratly islands in October as a challenge to China's sovereignty claims.