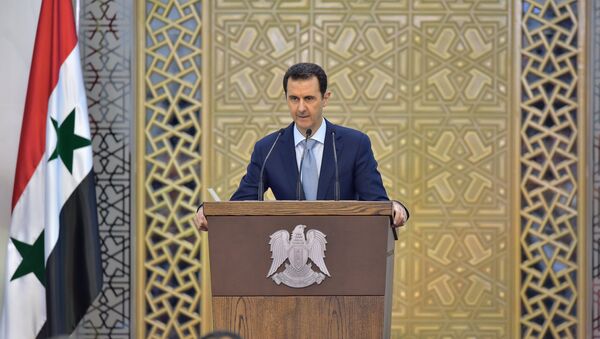 Assad is Not the Enemy of France, ISIL is - Hollande
“When I look at the present state of things in the world I realize that Vladimir Putin is the sole defender of Christian civilization one can rely on,” Assad said in an interview with French magazine Valeurs Actuelles.

The Syrian leader also said that he would step down only if asked to by the Syrian people and the Syrian parliament, adding that the issue of his possible resignation had not yet been raised on an international level.

Syria will only share intelligence information with France if Paris changes its policies in the region, President Assad said.

"If the French government is not serious in its fight against terrorism, we will not waste our time collaborating with a country, government or an institution that supports terrorism," he noted in the interview carried out the day after Friday's deadly attacks in Paris.

"You have to first change policy so that it is based on one criteria, to be part of an alliance that joins countries only fighting terrorism and not supporting them," Assad added.

More than 220,000 Syrians have lost their lives in four-and-a-half years of armed conflict, which began with anti-government protests before escalating into a full-scale civil war.

More than 11 million others have been forced from their homes as forces loyal to President Bashar Assad and those opposed to his rule battle each other — as well as jihadist militants from Islamic State and the al-Nusra Front.