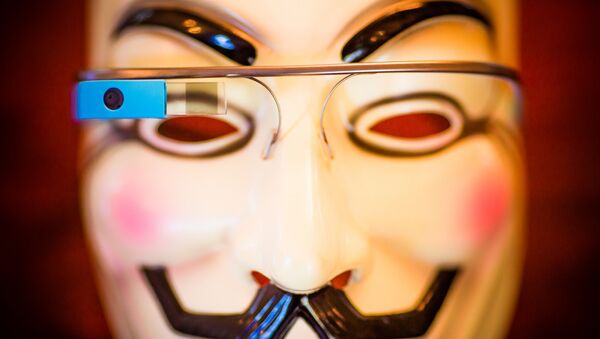 © Flickr / Thomas Hawk
Subscribe
Anonymous has proclaimed a digital war against ISIL because governments have not responded to their social media presence, said Gregg Housh, who currently runs the alternative news website Rebel News and is a former hacker himself, in an interview with Radio Sputnik.

Anonymous Vows to Find Those Responsible for Russia’s A321 Crash in Egypt
The group’s video response to the terrorist attacks in Paris, in which a representative in a signature Guy Fawkes mask promised that Anonymous will launch "the biggest operation ever" to take down ISIL militants, was widely spread via social networks and news outlets soon after release.

The video didn’t appear on the hacktivist group's YouTube channel and its authenticity is questionable, but Housh told Sputnik that this shouldn’t create dispute because “there is no group to begin with.”

“There was just a brand that was put out there.” Housh explained. “Anyone can come online at any time and say they’re Anonymous. And because they’ve said it, they are. They don’t have to report to anyone, there’s nowhere you can go that can claim to be official.”

According to Housh, Anonymous didn’t start their anti-ISIL campaign “just now,” and what they’ve done by now has been rather effective.

“They have outed thousands and thousands of twitter accounts and had them shut down, suspended. They’ve had hosting removed from hundreds of websites.” Housh claimed. “How many of those accounts that were shut down would have actually recruited someone, you don’t know. But what you do know is that they were trying”.

According to Housh, the main reason hacktivists are conducting major cyber attacks at ISIL infrastructure is because the tepid response of governments.

“It’s always been the courtesy of government or a corporate institute, doing something about this, but they’re not, so Anonymous has stepped up to do it.”

It’s not that there are no tools that could automatically filter allegedly dangerous stuff on social networks, but “you don’t want to start banning a bunch of Muslims simply because they’re Muslim”, Housh explained, and that’s one of the reasons not much is being done.

It is unlikely that any innocent users will be hurt in Anonymous anti-ISIL campaign, Housh concluded, and the chances of the group members getting tracked down by ISIL members completely depend on hackers’ skills.