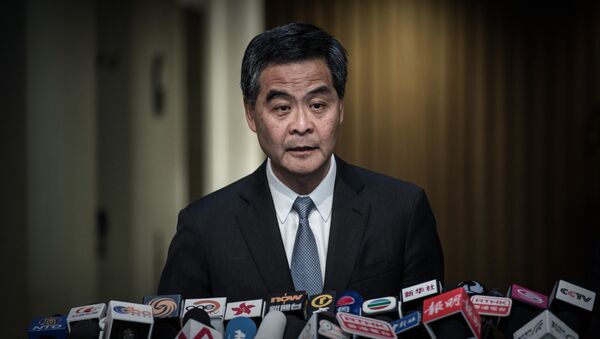 On October 5, 12 Pacific Rim nations reached an agreement on the wording and subject matter of the hotly-debated TPP deal.

"Hong Kong is very much a rule-based economy and we welcome rule based trade arrangements with other economies. But at the same time I think the TPP has taken a high benchmark approach and these high benchmarks and high standards could become rigid," Leung Chun-ying said at the APEC CEO summit in Manila.

He added that Asian economies, diverse in nature, are dominated by small- and medium-sized enterprises and TPP could become inflexible when applied to local reality.

"Despite the failure of the WTO, I do see the significance and the importance of having a regulatory trading system such as the WTO, it is very important, the authority that the WTO provides, so I think we shouldn't give up on the WTO," Leung Chun-ying said.

The failure of the Doha round prompted the United States, the European Union and a number of the Pacific and Latin American states to launch secret regional talks on the liberalization of deregulated trade and services (TTIP, TPP or TiSA) outside of the WTO.

The TPP will sharply deregulate trade among the signatories, which together make up 40 percent of the world economy.

The unusual secrecy surrounding the negotiations of the TPP, and the uncertain implications of the deal for workers’ rights, national sovereignty, employment, copyright and the environment have drawn strong criticism from lawmakers, economics experts and the public.

000000
Popular comments
That lying hound: forget he received his education at "kings college". But he worked for "Jones Lang LaSalle Incorporated " (I shall offer a Link to the LaSallian-Brothers below). The man who appointed him as Chief Executive of the Hong Kong Special Administrative Region, Sir Donald Tsang, was "Jesuit-educated". So here you have again, the Vatican through the backdoor infiltrating all countries of this world, spreading their satanic teachings and lies. Leung Chun-ying en.wikipedia.org/wiki/Leung_Chun-ying Jones Lang LaSalle Incorporated en.wikipedia.org/wiki/JLL_%28company%29 Institute of the Brothers of the Christian Schools en.wikipedia.org/wiki/Institute_of_the_Brothers_of_the_Christian_Schools Sir Donald Tsang en.wikipedia.org/wiki/Donald_Tsang Quotes jamesjpn.net/conspiracy/religion/roman-catholicism/romanism-a-menace-to-the-nation-by-jeremiah-j-cro

Pelagius
17 November 2015, 15:07 GMT
000000
By the way, the chief negotiators of the TTIP "Ignacio Garcia Bercero trade.ec.europa.eu/doclib/docs/2013/july/tradoc_151669.pdf and Dan Mullaney" ustr.gov/about-us/biographies-key-officials/daniel-mullaney-austr were Jesuit-educated. First at the spanish "Complutense" and second at "Georgetown". But feel free to do your research by yourself.