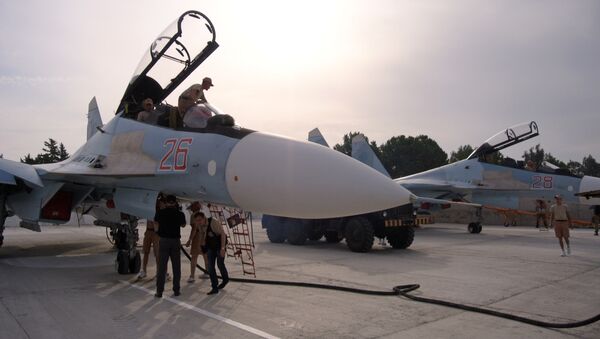 The analyst admitted that before the operation began, most analysts, himself included, did not believe Russia "capable of conducting a military operation away from its immediate neighborhood."

In his piece, appearing in The National Interest on Monday, Gorenburg, a military analyst for the CNA Corporation, noted that the Russian military "appears to have made great strides in increasing operational tempo and improving inter-service integration. It has also made significant advances in its ability to carry out expeditionary operations and showcased its recently developed stand-off strike capability."

Russian Warplanes Destroy 140 Terrorist Targets in Syria
This is especially noticeable, according to the analyst, when comparing the ongoing mission in Syria to the Georgia-South Ossetia conflict of 2008, where the Russian military stepped in to stop the Georgian invasion of the tiny breakaway.

Commenting on the Russian game plan in Syria, Gorenburg noted that the Aerospace Defense Forces began their campaign by "successfully target[ing] weapons and equipment depots that opposition forces had captured from government forces earlier in the conflict. Once these targets were eliminated, Russian air forces then coordinated with Syrian forces conducting ground operations against opposition forces in the northwestern part of the country."

According to the analyst, while "the operation has highlighted advances in Russian weaponry," with "aircraft [using] precision-guided munitions (PGMs) in combat for the first time," it also demonstrates some of "the limitations of these new capabilities," with a portion of the strikes said to be carried out by "older unguided bombs" as well.

Gorenburg argues that the advanced weapons used in the airstrikes, together with the land-attack cruise missile strikes launched against targets in Syria by ships in the Caspian Sea last month, have been aimed at least in part on "highlight[ing] their existence" and demonstrating their capabilities "to potential opponents."

The Caspian Sea strikes in particular, Gorenburg noted, "were not necessary for the success of the operation, which could have been carried out perfectly well by Russian aircraft already present in Syria. The real goal," he suggested, "was to show military planners in NATO member states and Russia's other neighbors that Russia could threaten targets in their countries from ships that could not easily be destroyed by enemy forces."

Russian Warplanes Hit 289 Terrorist Targets in Syria in Two Days
Commenting on the mission's operational tempo, the analyst noted that the pace first increased, peaking at 60 per day in October, then declined, "most likely because the easiest and most obvious targets have all been hit already while opposition forces have adapted to Russian air attacks and are not operating out in the open as much as they were in September and October."

According to Gorenburg, "the operation in Syria has [also] highlighted advances in integration among Russia's military services, [which] was one of the goals of the military reform undertaken after notable failures in this area revealed during the war in Georgia. While the air force is carrying out the active combat operations in this effort, it has shown an ability to work with both other services and with foreign forces."

For its part, the Russian Navy "has not only provided sealift for the operation, but is also responsible for providing long-range air defense with the S-300 system based on the Black Sea Fleet's flagship Slava-class cruiser Moskva."

As for the Russian ground forces, the analyst noted that while they "have played a relatively limited role in the conflict so far, they have been important for defending the air base."

Gorenburg candidly admits that "until September, most analysts (including myself) argued that Russia was not capable of conducting a military operation away from its immediate neighborhood because its military lacked the ability to transport significant numbers of personnel or equipment to remote theatres of operations."

With the launch of the operation, Gorenburg changed his tune, noting that "while it remains the case that Russia remains almost completely dependent on its rail network for military transport, the operation in Syria has shown that it has sufficient sealift and airlift capability to carry out a small operation away from its borders and that it can increase that capacity in innovative ways when pressed to do so."

Ultimately, the analyst noted that "while the jury is still out on how successful the operation will be in helping the Syrian government turn the tide against its various opponents, [Russia] has already shown that military reform has resulted in a significant increase in [the country's] warfighting capability."