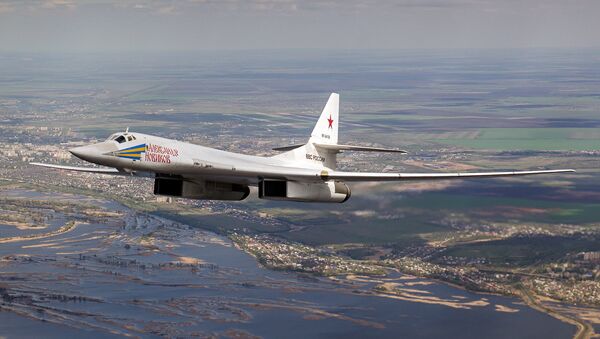 Russia used 34 air launched cruise missiles during the strike on the terrorist targets in Syria, Russian General Staff chief Gen. Valery Gerasimov said Tuesday. The members of the US-led coalition were informed about the operation in advance, he added.

“During a massive airstrike today, 14 important ISIL targets were destroyed by 34 air-launched cruise missiles. The targets destroyed include command posts that were used to coordinate ISIL activities in the provinces of Idlib and Aleppo, munition and supply depots in the northwestern part of Syria,” Gerasimov said.

Syrian army with the assistance of the Russian aviation managed to liberate 80 towns and regain control of the territory more than 500 square kilometers.

“Ten satellites are deployed. By redirecting several spacecraft and adjusting their orbit we now can photograph Syrian territory at required intervals,” he said.

"Russian Air Forces based on the Hmeymim airbase in Latakia have conducted 65 sorties of 98 planned for the day. During the airstrikes were destroyed six terrorist command centers, eight arm depots, six oil depots and four facilities used to manufacture explosive devices and rockets," Gerasimov said.

"The number of sorties was increased two times which allows us to launch powerful precision strikes against ISIL militants deep within the Syrian territory," the Russian Defense Minister said while briefeng the president on Syrian operation in the Russian National Defense Control Center.

Strategic bombers Tu-160, Tu-95MC and Tu-22 are involved in the Russian operation in Syria, the Russian Defense Minister said.

“Today, from 2:00 till 2:30 GMT, twelve Tu-22M3 long-range bomber aircraft carried out strikes against ISIL targets in the provinces of Raqqa and Deir ez-Zor,” Shoigu said.

Russia will continue massive airstrikes on terrorist targets in Syria. Russia's actions in Syria made it possible for Syrian army to begin an offensive against terrorists.

Russian warplanes launched airstrikes against Islamic State (ISIL) and other militant groups at the request of Syrian President Bashar Assad on September 30.

Since the beginning of the air campaign, Russian Aerospace Forces have carried out around 1,800 sorties, destroying some 2,700 terrorist targets, according to the General Staff. Several hundreds of militants have been killed, and dozens of command centers and depots have been destroyed.