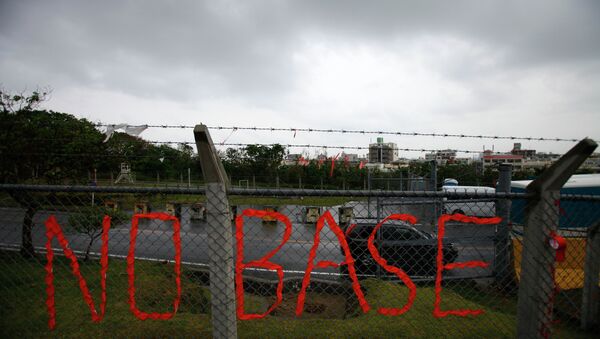 The decision of the Japanese government to sue the Okinawan governor for stopping the US army base relocation project will further exacerbate relations with locals there, Shinsaku Nohira told Sputnik.

Though local people and politicians have repeatedly voiced their opposition to the relocation of the controversial US army base on Okinawa to another area of the island, the Japanese government continues to ignore them, Shinsaku Nohira, spokesman for the Peace Boat NGO, told Radio Sputnik on Tuesday.

"Two years ago, the mayors of all villages, all cities in Okinawa, came to Tokyo to say that they are against a new base in Henoka, to Prime Minister Abe," said Nohira.

Abe ignored their request; the election of a governor, Takeshi Onaga, in Okinawa on a pledge to stop the site's construction has also fallen on deaf ears.

"Now, 74 percent of US bases in Japan are concentrated in Okinawa; Okinawa occupies just six percent of mainland Japan. People feel this is discrimination to Okinawa, that's why local people get furious," explained the Peace Boat campaigner, whose organization works to promote human rights and sustainable development.

Okinawa to Countersue Japan in December Over US Base Relocation
The proposal to relocate the Futenma base away from a residential area to Henoko, a less densely populated area has nevertheless met with opposition from locals, who want rid of the base completely.

On Tuesday, the Japanese government filed a lawsuit against the governor of Okinawa, demanding that Takeshi Onaga rescind his decision to withdraw permission to carry out key landfill work at the proposed site of the new base.

Okinawa Officials Challenge Tokyo Decision to Resume US Base Transfer
Immediately after being elected in November 2014 Onaga promised to look for legal errors in documents on the environmental impact of the landfill work, and withdraw the permission.

"My expectations are not optimistic" regarding the outcome of the lawsuit, said Nohira, who said that the governor would find it difficult to get the court to find in his favor, since it is not independent from the government.