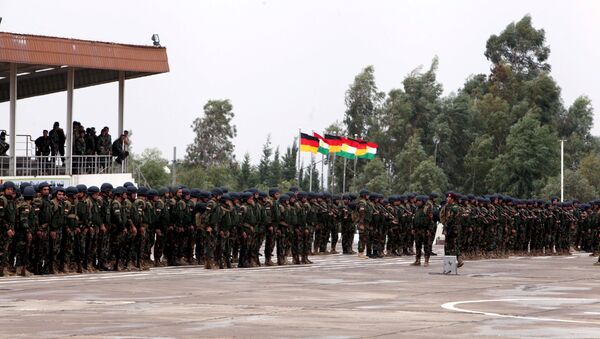 Germany will continue to deliver arms to Kurdish foghters in northern Iraq and to train them, according to German Defense Minister Ursula von der Leyen.

“[During bilateral talks on Tuesday,] the French side was pleased to hear that our participation in northern Iraq, where we are responsible for delivering arms to the Peshmerga [military forces] and training Peshmerga fighters, as well as…other ethnic groups, insofar as we confirm our participation, the French side may be assured that the fight against the Islamic State in northern Iraq, where the Peshmerga’s forces are successfully operating, will continue to be supported by us in any case,” Leyen said in Brussels.

Germany May Send More Soldiers to Train Anti-IS Kurdish Troops in Iraq
The Peshmerga is a military force of Iraqi Kurdistan.

Peshmerga has been fighting Islamic State since August 2014, liberating approximately 95 percent of the Kurdish territories within Iraq once held by the jihadists, according to a statement by the Kurdistan Regional Government (KRG).

A US-led coalition of some 60 nations has been conducting airstrikes against IS targets in Iraq since 2014, assisting the Iraqi Army and Kurdish militias fighting on the ground.