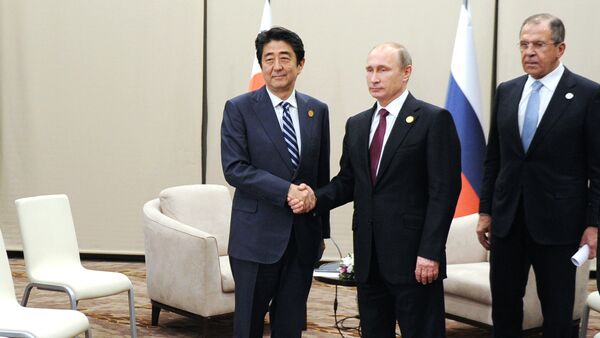 © AP Photo / Mikhail Klimentyev, Kremlin Pool Photo via AP
Subscribe
Japanese Prime Minister Shinzo Abe and Vladimir Putin agreed that the Russian president’s visit to Japan would be held in 2015, but next year is better time for Putin's visit, according to Press Secretary of the Japanese Foreign Ministry Yasuhisa Kawamura.

ANTALYA (Sputnik) — Next year would be a better timing for a visit of Russian President Vladimir Putin to Japan, Press Secretary of the Japanese Foreign Ministry Yasuhisa Kawamura told Sputnik on Monday.

He added that last year Japanese Prime Minister Shinzo Abe and Vladimir Putin agreed that the Russian president’s visit to Japan would be held in 2015.

“But as a result of yesterday meeting, it does not mean that this hope of the visit by the end of this year is already over, it is not the case,” Kawamura pointed out.

Progress in the negotiations between Russia and Japan on the disputed Kuril Islands is not a precondition for the visit of Russian President Vladimir Putin in Tokyo, Press Secretary of the Japanese Foreign Ministry Yasuhisa Kawamura said.

Japan Continues Preparations for Putin's Visit to Tokyo
"I would not say so," he said answering a corresponding question.

Japan and Russia never signed a permanent peace treaty after World War II because of a disagreement over four islands, which Russia calls the Southern Kurils and Japan the Northern Territories. The disputed islands, located in the Sea of Okhotsk, were claimed by Soviet forces at the end of WWII.

During bilateral talks on the sidelines of the UN General Assembly in New York last month, the Japanese prime minister and the Russian president agreed to step up negotiations for a mutually acceptable solution to the territorial dispute.

"Yesterday they had a very good meeting…. [It] was very frank and a very straight forward one," Kawamura said.

He added that the politicians' 12th meeting was characterized by "frank exchange of views."

"Prime Minister Abe said that […] appreciated that good dialogue and exchange have been progressed in the areas of economy, security and defense, culture and person to person exchanges. In the area of economy exchanges between the companies in the two countries accelerated in energy conservations and other environmental issues, medical services and agriculture," Kawamura said.

He added that in order to encourage development of cooperation a direct dialogue between the leadership was important.

The 2+2 format implies meetings involving the two countries foreign and defense ministers. The first such meeting was held in 2013.

"Japan thinks that the 2+2 frameworks is a meaningful format to discuss the issues of mutual interest. We hope that the we will reach an environment which will allow us to hold the next round of 2+2 meeting," Kawamura said.

He added that Russian President Vladimir Putin and Japanese Prime Minister Shinzo Abe did not have time to discuss this particular issue at the meeting on the sidelines of G20 Summit in Turkey yesterday.