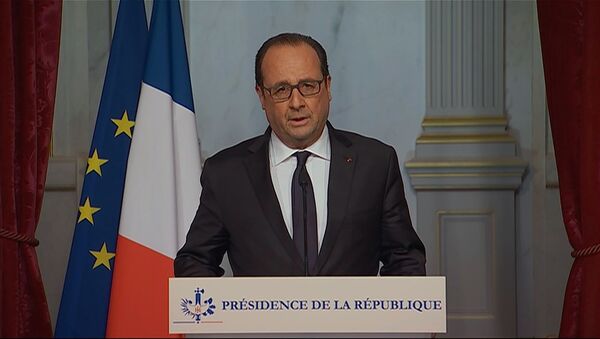 "In Syria, we're looking for the political solution to the problem, which is not Bashar Assad. Our enemy in Syria is ISIL," French president Francois Hollande said during the emergency meeting of the French parliament.

Moreover, France is going to intensify its participation in the Syrian coalition, Francois Hollande said at the French parliament.

"France is going to intensify its operations in Syria… We will continue to strike [at the terrorist targets] in the coming weeks," the French president said.

French President Francois Hollande called on the country’s parliamentarians on Monday to consider a bill, extending the nationwide state of emergency by three months.

"I decided to introduce a bill prolonging the state of emergency for three months and adapting it to the new threats for the parliament’s consideration," Hollande stated, calling on lawmakers to "adopt it by the end of the week."

The French president also voiced intention to create at least 5,000 jobs at the law enforcement agencies and 1,000 new jobs at the customs services within two years to ensure the country’s safety.

French President Francois Hollande said he would meet with his Russian counterpart Vladimir Putin and US leader Barack Obama in the upcoming days to discuss counterterrorism measures.

Speaking before France's Congress, Hollande, who skipped the weekend's G20 summit in Turkey due to the terrorist attacks in Paris, said he would travel to Washington and Moscow seeking to "join forces" against terrorism.

On November 13, eight extremists carrying automatic weapons and wearing explosive belts coordinated and perpetrated seven attacks at venues across Paris, killing some 130 people, at restaurants, the Bataclan concert hall and in the vicinity of the Stade de France stadium.