Will France Turn to NATO for Help in Responding to Terror Attacks? 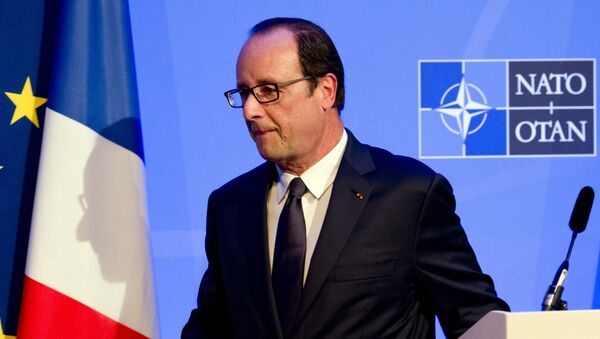 © AFP 2021 / ALAIN JOCARD
Subscribe
In the wake of the deadly Paris terror attacks, experts are arguing whether France will turn to NATO for help in response to the violence under the article of collective self-defense; some believe that it would do better to form a coalition.

Paris Attacks Could Be 'Much Different' If French Could Carry Guns
A string of coordinated terror attacks in Paris would be covered under Article 5 of the NATO Washington Treaty stipulating a joint response to an attack on a member state, according to NATO’s former Supreme Allied Commander in Europe James Stavridis.

"Paris would be within its rights to expect NATO to play a meaningful role in organizing a significant military response to the attacks," he wrote in the American international affairs magazine Foreign Policy.

Article 5 of the Treaty states that “[a]n armed attack against one or more of [the Parties] in Europe or North America shall be considered an attack against them all and consequently they agree that, if such an armed attack occurs, each of them, in exercise of the right of individual or collective self-defense recognized by Article 51 of the Charter of the United Nations, will assist the Party or Parties so attacked.”

If invoked, the article would require other members to respond to the violence in France as if it had taken place in their own countries.

The US is the only nation to have ever invoked Article 5 support in response to an act of terrorism: it did so after the events of September 11, 2001.

"The terrorist attacks — assuming that the Islamic State is, in fact, responsible for them — are the culmination of a long-running humanitarian disaster in Syria that has destabilized the Middle East and initiated the flow of millions of refugees into the heart of Europe. NATO can no longer pretend the conflict does not affect its most basic interests," Stavridis says.

However, Chris Chivvis, the associate director of the International Security and Defense Policy Center at the RAND Corporation, believes that based on past precedent in northern Africa, France could opt to go with a coalition of the willing to respond to the attacks rather than working through NATO.

German Interior Urges to Avoid Linking Paris Attacks to Refugee Crisis
Working through NATO would provide the international agency's command-and-control structure for the operation and would also lend "political legitimacy" that a coalition wouldn't; however, NATO can sometimes move more slowly than a coalition, the Washington Examiner quotes him as saying.

According to the Lawfare blog, the United States presumably sought NATO support for two reasons: legitimacy and pragmatism.

“First, being able to point to NATO’s conclusion that the United States had suffered an armed attack strengthened the US argument that it had a right to use force in self-defense under UN Charter article 51 against a non-state group,” the author reasons.

“Second, although the US did not turn to NATO for military support for its initial operations in Afghanistan (which it and the UK conducted under Operation Enduring Freedom), NATO did subsequently assist in bringing stability first to Kabul and then to larger swaths of Afghanistan.”

“First, at this point many states clearly believe that a state can suffer an armed attack from and be in an armed conflict abroad with a non-state actor.”

Americans, West Silent on Iraq, Lebanon Attacks, Come Alive for Paris
It further explains that every state that participated in Operation Enduring Freedom in Afghanistan (including the US, UK, Canada, Australia, Norway, Germany, New Zealand, Turkey, Italy, and Netherlands) and every state fighting in support of Iraq in Syria presumably holds this view. So the need for NATO to legitimize this argument is diminished.

Further, from a pragmatic perspective, a significant number of NATO member states already are involved in anti-ISIL operations in Iraq, Syria, or both, including the US, UK, France, Turkey, Belgium, Canada, Denmark, and the Netherlands.

The most significant NATO state that is not participating in those operations is Germany, although that may change now, whether or not France seeks to trigger Article 5.

Nevertheless, there are advantages to compelling NATO's member states to launch a military response, it reasons. Unless France is worried that its NATO partners will not be willing to treat Friday’s violence in Paris as an armed attack, France may well seek NATO participation.

Furthermore, involving NATO may provide a boost to an institution that has been casting about in recent years for a raison d’etre.

If France opts to turn to NATO, Stavridis says, a major NATO mission against the Islamic State would consist of a number of smaller, practical steps.

Among others, its key initiative would be to “build an ‘open coalition,’ one that can not only include the forces of traditional allies, but also those of NATO’s traditional adversary, Russia.”

“The Russian government claims to want to defeat the Islamic State, and it should have no lack of motivation, given the over 200 dead citizens — including many women and children — who seem to have been massacred by the Islamic State in the downing of a civilian aircraft just two weeks ago. Russia should be invited to participate alongside NATO and other coalition members against the Islamic State. “

If the French seek strong NATO participation in a broad and lethal campaign against the Islamic State, he adds,  Americans must offer support.

"They would be following the example set by the French on behalf of the United States after 9/11, and, in an earlier century, during the American Revolutionary War".

000000
Popular comments
Let me get this straight. ISIS is a NATO creation. For several months or years, the high technology and weaponry of the US - which we all witnessed in the two Gulf wars - was unable to target ISIS terrorists in Syria. So, now France is turning to NATO? Isn't it time for France to start acting in the interest of the French people?
Athanasios
15 November 2015, 10:25 GMT1
000000
"NATO can sometimes move more slowly than a coalition" Lol. Judging by how long they take to "advance" up to Russia´s borders, which is years, and how slow in comparison to Russia & her allies they move hardware, troops assemble"task force´s", thats the understatement of the year. But Hollande (and CRIF, which, is the French equivalent of AIPAC, pulling his strings) , is a deceitful s.o.b. Given that Obongo & his Teleprompter in the White House rushed to give a speech even before the attack was over and Hollande are cetainly expected to parrot it, suggest that they are preparing an invasion of Syria with the terrorist attack by their own Daesh clients, as a pretext. French security have years of experience with terrorists, that they somehow couldn´t find out what these teenagers were up to is ridiculous. But Russia was apparently several steps ahead when they let it become known that they have added mobile S-400´s to Syria´s defences (in adittion to Syria´s s-300 and those on the battle cruiser Moskva in the Med.). The pre-text is not going to work. If Obongo & Hollande want to take out their Frankenstein monster Daesh, they have to talk to Russia nad Syria first