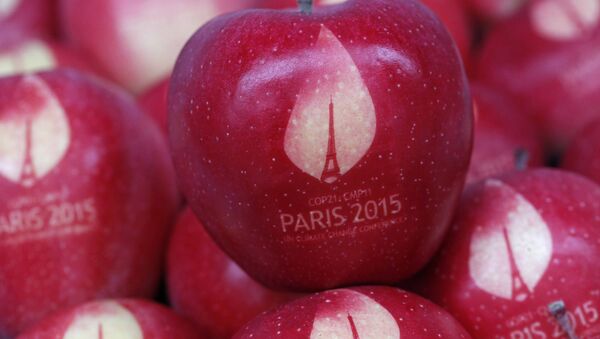 France May Fight ISIL on the Ground in Wake of Paris Attacks - Stratfor
ANTALYA (Turkey) (Sputnik) – The long-anticipated international climate summit in Paris will be held as planned, as all participating member states consider it unacceptable to bow to terrorist threats, Russian G20 Sherpa Svetlana Lukash said Sunday.

"It will be held for sure, all the states, at least at the level of presidential representatives consider that it is unacceptable to change their plans and to surrender to the terrorists' threats, that's why Paris conference will be held and we hope that it will be successful," Lukash said on the sidelines of G20 Summit in Turkey.

On Friday night, extremists wearing explosive belts and carrying automatic weapons attacked several sites across Paris, killing 129 and injuring dozens of people at restaurants, the Bataclan concert hall and in the vicinity of the Stade de France sports arena.

000000
Popular comments
Another waste of time. Reality is , no country have the cash necessary to pay for such venture. Passing laws, is all they understand. But must small corporations, those beginning will go bankrupt. IF I was China, I try a progressive thing. Beginning by helping the small corporations that pollute air. Or lose all and be other U.S and E.U. That all corps move to China or the next poor that pay less to workers, and pay no taxes for 20 yrs, and no benefits. They tell governments that they help pay college, and the can practice with workers. In U.S and E.U, is close to that. Veterans of military get to become guinea pigs for students and experiments. Oh and CLASSIC medicine, and cheapest meds found. Hence, U.S bought generic meds of Russia. To control and hike prices.
cast235
15 November 2015, 12:11 GMT
000000
Newsfeed
0
New firstOld first
loader
LIVE
Заголовок открываемого материала
Access to the chat has been blocked for violating the rules . You will be able to participate again through:∞. If you do not agree with the blocking, please use the feedback form
The discussion is closed. You can participate in the discussion within 24 hours after the publication of the article.
To participate in the discussion
log in or register
loader
Chats
Заголовок открываемого материала
Worldwide
InternationalEnglishEnglishMundoEspañolSpanish
Europe
DeutschlandDeutschGermanFranceFrançaisFrenchΕλλάδαΕλληνικάGreekItaliaItalianoItalianČeská republikaČeštinaCzechPolskaPolskiPolishСрбиjаСрпскиSerbianLatvijaLatviešuLatvianLietuvaLietuviųLithuanianMoldovaMoldoveneascăMoldavianБеларусьБеларускiBelarusian
Transcaucasia
ԱրմենիաՀայերենArmenianАҧсныАҧсышәалаAbkhazХуссар ИрыстонИронауОssetianსაქართველოქართულიGeorgianAzərbaycanАzərbaycancaAzerbaijani
Middle East
Sputnik عربيArabicArabicTürkiyeTürkçeTurkishSputnik ایرانPersianPersianSputnik افغانستانDariDari
Central Asia
ҚазақстанҚазақ тіліKazakhКыргызстанКыргызчаKyrgyzOʻzbekistonЎзбекчаUzbekТоҷикистонТоҷикӣTajik
East & Southeast Asia
Việt NamTiếng ViệtVietnamese日本日本語Japanese中国中文Chinese
South America
BrasilPortuguêsPortuguese
NewsfeedBreaking
01:58 GMTMike Tyson Reveals Marijuana Makes Him 'Different Person' as He Launches New Cannabis Line
01:52 GMTConcerns About Spread of New Covid Strain Rise as Another Migrant Caravan Crosses Into US - Report
01:28 GMTMass Theft Occurs at Best Buy Store in Minnesota, Police Say
00:26 GMTTrump Keeps Mt. Rushmore Sculpture With His Face on It on Display in His Office
00:01 GMTA Glimpse of Hope: Biden Approval Rating Climbs 2 Points, But Still Scores Low on Economy - Poll
YesterdayAbbott Says Texas Is Ready For Possible Cold Winter Due to ‘Dozen Laws’ Signed
YesterdayBarnier Says France Has to 'Be Ruthless With the British' Amid Migrant Crisis - Report
YesterdayEx-Labour Leader Corbyn Slams 'Irrational' Suspension From Party One Year On
YesterdaySudanese Army Repels Attack by Ethiopian Troops With Casualties on Both Sides
YesterdayWHO Says No Need for Panic Over Omicron Coronavirus Strain as Much Remains Unknown
YesterdayBiden's First Christmas Tree Will Reportedly Cost Taxpayers $139,000
YesterdayMemes Flood Twitter After WHO Dubs New Covid Strain Omicron
YesterdayOmicron Coronavirus Strain May Already Be in US, Going to Spread 'All Over', Fauci Says
YesterdayNCT 2021 Walks Into a Dream in New Teaser Video 'Year Dream: Stage 2 - Surfing in Our Dreams'
YesterdayWHO Confirms Some Guesses on Why It Skipped Two Letters and Named New COVID Variant 'Omicron'
YesterdayFrance Mulls Autonomy for Caribbean 'Confetti of Empire' Amid COVID-19 Rule Protests
YesterdaySolomon Islands Gripped by Anti-China Protests as US Keeps Largely Mum
YesterdayRussia is Not Going to Attack Anyone, Ambassador to US Says
YesterdayWhy Washington's 'Russian Invasion' Scare is Cover for Kiev's New Offensive Against Donbass
YesterdayActor Seth Rogen Mocked Online For Downplaying Crime in Los Angeles