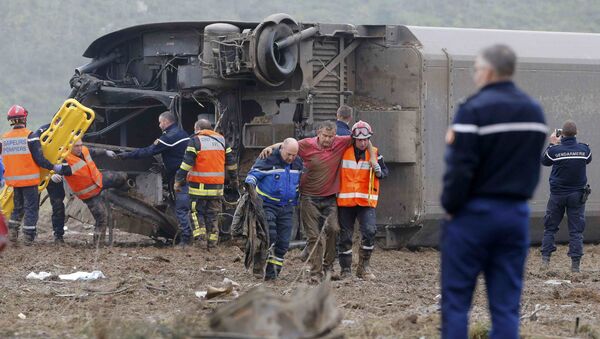 A test train with no passengers on board derailed near Strasbourg on Saturday, splitting apart and plunging into a canal.

Ten people were killed and 32 injured as a TGV high-speed train derailed near Eckwersheim in Northeast France, on Saturday, according to officials. The train, carrying 49 people, was going in the direction of Strasbourg when it went off tracks while crossing a bridge and the carriages fell into the Marne-Rhine canal, witnesses report.

The train burst into flames, split apart and plunged into the Marne au Rhin canal.

Spokeswoman Viviane Chevallier of the Bas-Rhin region said there were no immediate indications that Saturday's crash had anything to do with deadly terrorist attacks in Paris a day earlier.

Five helicopters were deployed to evacuate the injured to hospital in the nearby city of Strasbourg. Two government ministers were on way to the site.

The rail accident took place near a small community of Eckwersheim, in the Bas-Rhin department in Alsace, 10 km from the German border.