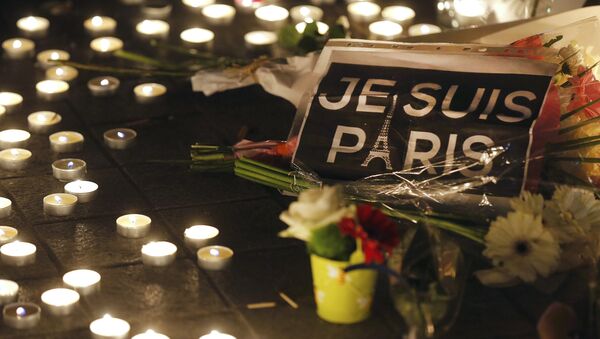 © REUTERS / Vincent Kessler
Subscribe
While American mainstream media is providing wall-to-wall coverage of the Paris attacks, the alternative news outlet The Spectacle is wondering why bombings in Iraq and Lebanon went virtually unnoticed by the American public.

The alternative news outlet The Spectacle notes that the same day of the Paris attacks, Lebanon was just starting to come to terms with their own terrorist attack.

Death Toll From Beirut Twin Blasts Rises to 43 – Lebanese Red Cross
"Friday marked a day of mourning in Lebanon following an attack by ISIS suicide bombers who killed at least 43 people and wounded more than 28 in Southern Beirut," the author, Javier Simon, wrote in his piece titled "In Wake of Paris Attacks, Is the Mainstream Media Undermining Wider ISIS Threat?" "Aljazeera called it 'the worst attack in years in Lebanon.' A statement reportedly made by ISIS credited the attack to 'soldiers of the caliphate.' That day, Iraq suffered two attacks which the terror group also took credit for. In one, a suicide bomber struck a memorial service in Baghdad that killed at least 21 people and wounded 46. A roadside bomb also struck the Iraqi capital that day killing at least five people and wounding 15, according to police officials."

The Spectacle then goes on to speculate that it may just be a matter of numbers:  The 128 deaths in Paris might potentially overshadow the numbers of deaths in Beirut and Baghdad.

However, Simon concedes that, overall, the Middle East has been hit far harder in terrorist acts.

"The numbers tally up in the Middle East too. According to the Associated Press, 'Since the emergence of Islamic State extremists, attacks in Baghdad have taken place almost daily, with roadside bombs, suicide blasts and assassinations …'

Suicide Bombing Kills at Least 18, Injures 41 in Baghdad
That, he notes, might just be the problem:  The West has simply come to see much of the region as a dangerous place where violence is a way of life.

"In the U.S., it can become easy to dismiss stories about bombings, and terrorist attacks coming out of the Middle East as something of every-day occurrence," Simon concludes. "More eyebrows are raised when such attacks come to the West, which is supposed to house world powers, as opposed to a troubled state dealing with radical forces trying to topple the government and willingly engaging in frequent acts of violence to prove it can’t protect all its people."

Not everyone is as forgiving of American media, however.

On his site "Hummus for Though," Lebanese blogger Joey Ayoub wrote that the discrepancy is personal.

"I come from a privileged Francophone community in Lebanon. This has meant that I’ve always seen France as my second home," Ayoub wrote. "It… seems clear to me that to the world, my people’s deaths in Beirut do not matter as much as my other people’s deaths in Paris. ‘We’ don’t get a safe button on Facebook. ‘We’ don’t get late night statements from the most powerful men and women alive and millions of online users."

"Our empathy as human creatures is in sadly limited supply, and even professional counselors experience 'empathy fatigue' when they reach their natural limits for emoting towards and on behalf of others," Hobart writes. "Not having Lebanese coworkers or eating Kenyan food doesn't make those victims' lives matter any less, but it does place those faraway events lower down the empathy list given your particular, limited frame of reference."

An Australian journalist suggested the issue starts at the top with world leaders who instantly issued statements after Paris but were more quiet after Baghdad and Beirut.

"The bombings in Lebanon drew no tweet from Malcolm Turnbull, no social media statement from Barack Obama, no live media blogs from Western media, no wall-to-wall media coverage. And no twitter hashtags from Australians in solidarity with the Lebanese," the New Matlida wrote.

Distorted News Subverts Mainstream Western Media Legitimacy
Facebook, for its part, issued a statement defending its choice to use the alert feature after Paris but not earlier.

"Safety Check is a relatively new feature and until yesterday we had only activated it in the wake of natural disasters," the statement reads. "The product will continue to evolve as we learn more about how it’s used during different crises. We hope to never be confronted with a situation like this again, but if we are, we are of course open to activating the tool given how reassuring it has been for people in Paris."

Simon, however, concludes that whether it's Iraq, France, or the United States, it's worth remembering "that the suffering caused by the Islamic State, and other groups who wish to instill fear on the masses, is one shared by the world at large."
000000
Popular comments
I agree absolutely with what Angry Arab has to say about this: "5) Western governments AND media have been rather cynically silent about victims of ISIS terrorism if the civilian victims happen to be categorized as "enemies". Western governments AND media (look at the dispatches from Times and Post over the last 4 years about Syria) have consistently ignored and even cheered sectarian massacres of Syrian and Lebanese civilians if seems as being perpetrated by foes of the Syrian regime. 6) Just as ISIS and Al-Qa`idah brought terrorism to the heart of the West, Western governments have also been exporting death and destruction to the Middle East and North Africa: from Mali to Libya to Egypt to Sudan to Somalia to Syria to Iraq to Pakistan to Afghanistan. Terrorism has been inflicted on people in those countries by the terrorism of ISIS and Al-Qa`idah and by the bombs and rockets and drones of Western governments. 7) All Arabs today have noticed something that can't be ignored: how ISIS and Al-Qa`idah terrorists travel the world to inflict their terrorism by yet spare Israel and its interests. The relationship between the Israeli Zionist occupation entity and Nusrah Front--the official branch of Al-Qa`idah in Syria--is not a secret anymore." There's much more at the link, angryarab.blogspot.com/2015/11/some-observations-about-carnage-in-paris.html
karlof1
15 November 2015, 02:24 GMT
000000
Newsfeed
0
New firstOld first
loader
LIVE
Заголовок открываемого материала
Access to the chat has been blocked for violating the rules . You will be able to participate again through:∞. If you do not agree with the blocking, please use the feedback form
The discussion is closed. You can participate in the discussion within 24 hours after the publication of the article.
To participate in the discussion
log in or register
loader
Chats
Заголовок открываемого материала
Worldwide
InternationalEnglishEnglishMundoEspañolSpanish
Europe
DeutschlandDeutschGermanFranceFrançaisFrenchΕλλάδαΕλληνικάGreekItaliaItalianoItalianČeská republikaČeštinaCzechPolskaPolskiPolishСрбиjаСрпскиSerbianLatvijaLatviešuLatvianLietuvaLietuviųLithuanianMoldovaMoldoveneascăMoldavianБеларусьБеларускiBelarusian
Transcaucasia
ԱրմենիաՀայերենArmenianАҧсныАҧсышәалаAbkhazХуссар ИрыстонИронауОssetianსაქართველოქართულიGeorgianAzərbaycanАzərbaycancaAzerbaijani
Middle East
Sputnik عربيArabicArabicTürkiyeTürkçeTurkishSputnik ایرانPersianPersianSputnik افغانستانDariDari
Central Asia
ҚазақстанҚазақ тіліKazakhКыргызстанКыргызчаKyrgyzOʻzbekistonЎзбекчаUzbekТоҷикистонТоҷикӣTajik
East & Southeast Asia
Việt NamTiếng ViệtVietnamese日本日本語Japanese中国中文Chinese
South America
BrasilPortuguêsPortuguese
NewsfeedBreaking
19:13 GMTState Department Spokesperson Price Briefs Press in Washington, DC
18:27 GMTUS Slaps Commander of Iran's IRGC Basij Forces With Sanctions
18:18 GMTBiden Warns Putin of Economic Sanctions and Other Measures in Event of Ukraine Military Escalation
18:18 GMTWashington's Major Intersection Blocked by Protesters Demanding Cut to Defense Budget
18:05 GMTCapitol Riot Probe: Mark Meadows to Cease Cooperation With Jan. 6 Panel
17:59 GMT80th National Pearl Harbor Remembrance Day Held in Hawaii
17:53 GMTProposed US Defense Spending Bill Does Not Include Nord Stream 2 Sanctions
17:45 GMTMinsk Introduces Embargo on Some Goods in Response to Western Sanctions
17:37 GMTPentagon: Terrorist Threat to US From External Attacks Lowest Since 9/11
17:30 GMTUS Judge Rules Against Coronavirus Vaccine Mandate for Federal Contractors
17:17 GMTIOC Executive Board Holds Press Conference Amid US Diplomatic Boycott of Beijing Olympics
16:51 GMTIsraeli Prime Minister Claims Country Is 'Fighting Off Forces of Evil' Every Day
16:51 GMTApple CEO Reportedly Lobbied Chinese Officials to Get Preferential Treatment in Country
16:44 GMT'F**k You': Rittenhouse Hits Back at LeBron James After Basketball Star Doubts Tears in Court
16:38 GMTCan It: Elon Musk Rips Joe Biden’s Build Back Better Bill, Calls on Senate to Not Pass It
16:31 GMTUS Would Urge Germany to Halt Nord Stream 2 Pipeline if Russia Invades Ukraine, Reports Say
16:16 GMTMan Kills Family, Himself Over Fake Vaccine Certificate in Germany, Reports Say
15:42 GMTDrug Sniffer Dog Van Spotted Outside Parliament After Cocaine Use Reported to Cops
15:31 GMTCalifornia Port Congestion Slowly Shrinking, But Still Risks Christmas Goods Delays
15:28 GMTRose McGowan’s Lawsuit Against Weinstein Dismissed After She Fails to File Paperwork by Deadline