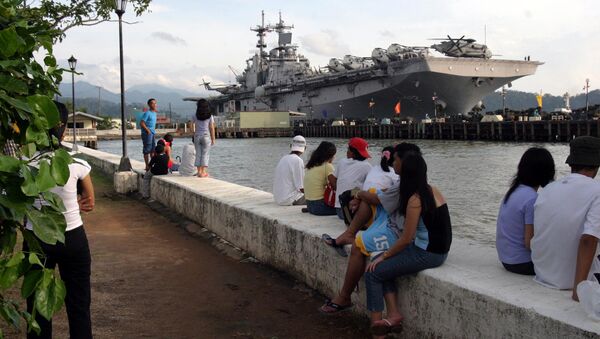 After being kicked out 20 years ago, the US Navy has returned to the base at Subic Bay, Philippines, where American military personnel are being welcomed in the wake of Chinese assertiveness in the region.

The US Navy began using the base last year after the United States and the Philippines came to terms on the Enhanced Defense Cooperation Agreement. The deal grew from concern in the Philippines about China’s growing presence in the South China Sea.

Some 6,000 US personnel came to Subic in April, and are set to return for exercises in 2016 in agreement with Philippine authorities, the Christian Science Monitor reported. US ships are using Subic Bay as a resupply port, and American merchant marine ships docked there in late October.

President Barack Obama is set to meet with President Benigno Aquino III in Manila on November 17 on the sidelines of a regional economic cooperation event.

After World War II, Subic was the largest US naval facility in the Pacific, and naval personnel helped turn it into an area notorious for bars and prostitution.

By the time the United States formally left Subic in 1992, the region was eager to rid itself of its colonial past and the "ugly Americans."

This time, the Philippine armed forces, not the Pentagon, will govern the base with new rules – including a midnight to 5 AM curfew – designed to curb off-duty behavior.

The base is now home to a shopping mall with cinemas and some 200 stores, including Starbucks, TGI Friday's, and eventually Gold’s Gym.