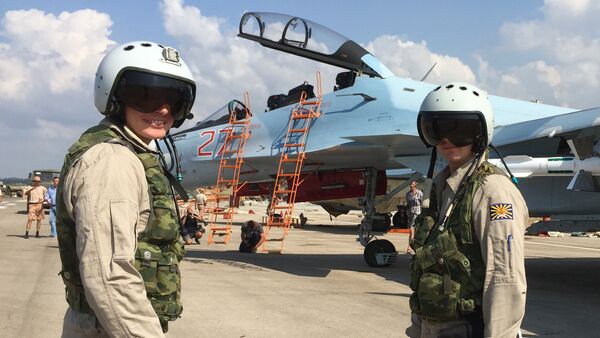 Although Russia and the United States are not "holding hands" publicly, they are de facto cooperating in their fight against ISIL, policy director for Just Foreign Policy think tank Robert Naiman maintains.

This nascent collaboration might not resemble the US-Soviet alliance against Hitler but there are other ways of working towards achieving the same goal. The analyst pointed to positive developments on Syria: diplomatic talks have been launched, Iran has been invited to participate in these talks and there are mechanisms in place to facilitate intelligence sharing.

"In fact, if the two countries do ramp up their efforts against ISIL in different theaters in Syria, that is a form of cooperation, whether they are holding hands publicly or not," Naiman told Radio Sputnik.

If the US continues to assists the Kurds fighting against the radical group from the North, while Russia, Syria, Iran and Hezbollah keep pressing militants from the West, then "the two sides do not necessarily have to coordinate that much," he added.

The expert urged all the stakeholders to resort to realistic diplomacy, adding that the US is clearly not opposed to a broader conversation on Syria with Russia. At the same time, he warned against waiting for a breakthrough at the upcoming talks in Vienna. However, the absence of major announcements should not be seen as a failure.

"Even if there is no breakthrough, it does not mean that the talks have failed. The fact that these countries are even talking is" a positive development, he noted. "Let's look for smaller agreements, like a ceasefire or a local ceasefire, let's reduce the killing and let's look for cooperation where we can find it."

Whose War is Washington Waging in Middle East?
Naiman also mentioned the White House decision to send approximately 50 special operation troops to train and assist rebels in Syria. The escalation that it represents is "worrisome and potentially dangerous and it's right for people to be concerned about it. However, it is not necessarily a point of no return," he noted.

The majority of Americans do not want the US to send ground troops to Syria on the scale comparable to Iraq and Afghanistan. The American public is so opposed to this idea that even presidential candidates, who often try to tap into collective aspiration to garner support, don't advocate sending troops to Syria, Naiman pointed out.