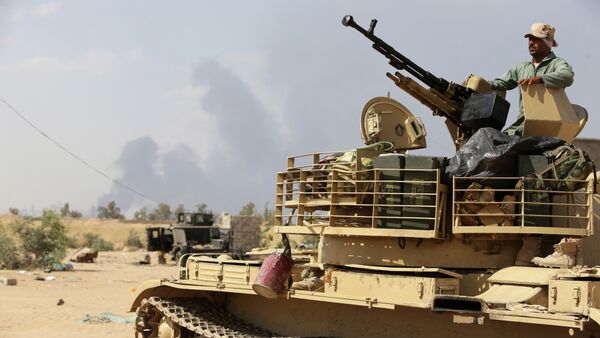 Russian Deputy Foreign Minister Mikhail Bogdanov on Friday met with a delegation from Iraq’s committee on security and defense to discuss the situation in Iraq on the Islamic State’s expansion, as well as Russia’s efforts in the fight against terrorism in Syria.

MOSCOW (Sputnik) — Iraq intends to strengthen cooperation with Russia in the fight against the Islamic State group, the Russian Foreign Ministry said Friday.

"The Iraqi side underlined its intention to further strengthen coordination and cooperation between Moscow and Baghdad on counterterrorism. The importance of continued Russian support to the Iraqi government was noted," the ministry said in a statement.

“During the meeting, a discussion was held on the developing situation in Iraq in regard to Iraqi authorities’ decisive counteractions against the expansion of the Islamic State, as well as Russia’s Aerospace Forces operations in suppressing terrorists in neighboring Syria,” the ministry said.

Vast territories in Iraq and neighboring Syria have been occupied by the Islamic State, which has proclaimed a caliphate on the land under its control.

Tale of One Dead Soldier: How Syrian Army Defends Its Positions in Daraa
Since September 30, Russia has been conducting pinpoint airstrikes on ISIL positions in Syria, at the request of country's president Bashar Assad. So far, the Russian Aerospace Forces have carried out around 1,800 sorties, destroying some 2,700 terrorist targets. Several hundreds of militants have been killed, dozens of command centers and depots destroyed.