'It's All Putin's Fault': US War Party Ruining Russo-American Relations 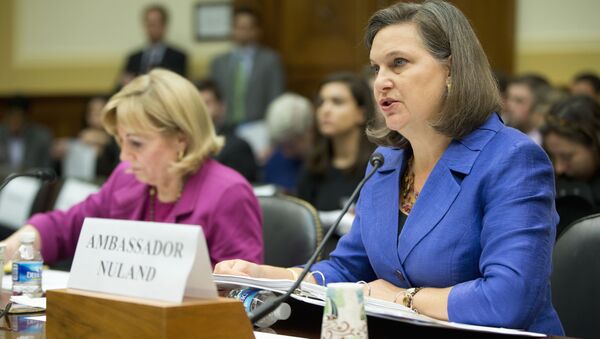 © AP Photo / Pablo Martinez Monsivais
Subscribe
It seems that the US war party's primary goal is to forever ruin US-Russian relations, former advisor to the US-Russia Presidential Commission at the US State Department James Carden notes.

A hearing held by the House Foreign Affairs Committee last Wednesday has indicated clearly that the US war party is determined to drive a wedge between the United States and Russia, according to James Carden, a Washington-based expert and former advisor to the US-Russia Presidential Commission at the US State Department.

"The war party's stand, or goal, is to forever ruin US-Russian relations. But rather than being preoccupied by Russia's much-decried invasion of Ukraine, it is now focused on Russia's 'escalation' over Syria," Carden pointed out in his article for the Nation.

Ticking Clock: European Civilization on the Brink of Extinction?
"The committee heard the testimony of two assistant secretaries of state, Victoria Nuland, under whose purview Russia falls, and Anne Patterson, who has the unhappy responsibility for overseeing American policy in North Africa and the Middle East," the former US official narrated.

Rather predictably, the two assistant secretaries of state missed no opportunity to place all the blame for what is going on in Syria, including the refugee crisis, on Russia. Needless to say, neither Nuland, nor Patterson provided any evidence to confirm their accusations.

"Russia's new direct combat role in Syria has exacerbated an already dangerous refugee outflow, straining even the most generous Europeans' ability to cope," Nuland said, as quoted by Carden.

In her turn, Patterson even went so far as to claim that "85-90 percent of the [Russian] strikes are aimed at non-ISIS opposition."

"About the mythical 'moderate' Syrian opposition, Patterson was asked if we are 'in coalition building' with al-Nusra? Patterson conceded that it is possible that some of our 'moderate' opposition forces 'were forced to join' them. Sure," the American expert remarked with a trace of irony.

To complicate matters further Patterson insisted "with a straight face" that ISIL and Bashar al-Assad "are linked."

Proxy War on Two Fronts: How Far Will US Hawks Go to Maintain Dominance?
"Could she possibly believe this? It would certainly come as news to Assad, among others," Carden added.

Incredible as it may seem, some of this nonsense was eagerly swallowed by several members of the committee.

"The war party's refrain remains the same: 'It's all Putin's fault'," the former official stressed.

And still there is light at the end of the tunnel, Carden believes, referring to the fact that later that afternoon Professor Stephen F. Cohen, Professor Ellen Mickiewicz, Ambassador Jack Matlock, and former Procter and Gamble CEO John Pepper "urged Congress to eschew a deeply prejudicial approach to Russian relations."

The expert posed the question: if the US intelligence sources are right, and Russia's Metrojet Flight 9268 was downed by ISIL, doesn't that mean that Russia and the United States are now in the same boat?

"If so, might it finally dawn on the American political establishment that perhaps the United States and Russia are in this fight together?" James Carden asked.

000000
Popular comments
The tactic may work on people who were already misled in the first place. But I don't think a lot of people are accepting the propaganda or the violence that goes with it. There's a reason Kerry and others complain about "losing the information war". I think they see it too. It's just not possible to say this chaos is desired or anyone's fault other than NATO countries.
jas
12 November 2015, 20:37 GMT2
000000
US people need to exterminate neocons
Thor
12 November 2015, 22:45 GMT1
000000
Newsfeed
0
New firstOld first
loader
LIVE
Заголовок открываемого материала
Access to the chat has been blocked for violating the rules . You will be able to participate again through:∞. If you do not agree with the blocking, please use the feedback form
The discussion is closed. You can participate in the discussion within 24 hours after the publication of the article.
To participate in the discussion
log in or register
loader
Chats
Заголовок открываемого материала
Worldwide
InternationalEnglishEnglishMundoEspañolSpanish
Europe
DeutschlandDeutschGermanFranceFrançaisFrenchΕλλάδαΕλληνικάGreekItaliaItalianoItalianČeská republikaČeštinaCzechPolskaPolskiPolishСрбиjаСрпскиSerbianLatvijaLatviešuLatvianLietuvaLietuviųLithuanianMoldovaMoldoveneascăMoldavianБеларусьБеларускiBelarusian
Transcaucasia
ԱրմենիաՀայերենArmenianАҧсныАҧсышәалаAbkhazХуссар ИрыстонИронауОssetianსაქართველოქართულიGeorgianAzərbaycanАzərbaycancaAzerbaijani
Middle East
Sputnik عربيArabicArabicTürkiyeTürkçeTurkishSputnik ایرانPersianPersianSputnik افغانستانDariDari
Central Asia
ҚазақстанҚазақ тіліKazakhКыргызстанКыргызчаKyrgyzOʻzbekistonЎзбекчаUzbekТоҷикистонТоҷикӣTajik
East & Southeast Asia
Việt NamTiếng ViệtVietnamese日本日本語Japanese俄罗斯卫星通讯社中文（简体）Chinese (simplified)俄罗斯卫星通讯社中文（繁体）Chinese (traditional)
South America
BrasilPortuguêsPortuguese
NewsfeedBreaking
16:38 GMTWhy Did the US Ditch Its European Allies in Favour of UK and Australia to Wrangle With China?
16:29 GMTUS Pledges to Boost 'Removal Flights' to Transport Migrants Stuck Under Texas Bridge
16:12 GMT'Justice for J6': Protesters Rally in Washington, DC to Support Charged Capitol Riot Demonstrators
15:39 GMTSeveral Reportedly Injured as Car Rams Into Cafe Terrace in Fontainebleau, France
15:27 GMTMalaysia Claims New AUKUS Alliance May Spark Nuclear Arms Race in Indo-Pacific
15:08 GMTParis Being Rocked by Protests Against COVID-19 Passes for 10th Weekend in Row
14:31 GMTNotre-Dame Restorers Finish Fortification Works to Start Restoration Phase
14:19 GMTWhen Trump Asked Obama About His 'Biggest Mistake', POTUS 44 'Couldn't Think of Anything': Book
14:05 GMTFrance 'Raises Game' on Migrant Interceptions After UK Threatens to Scrap Funding to Paris
14:00 GMTFour British Ex-PMs Snub Johnson's Chequers Centenary Banquet
13:58 GMTAir Defence Strengthened in Northern Ukraine as Part of Exercises With NATO, Air Command Says
13:54 GMTSenior Dies From Self-Inflicted Wounds at Medics' Protest in Warsaw
13:53 GMTGuinean Military Says Ousted President Conde to Remain in Country
13:30 GMTElon Musk Says Future SpaceX Ships Will Have Food Warmers After Inspiration4 Mentions Cold Pizza
13:22 GMTEx-Sec of State Pompeo, NSA O'Brien Knew Nothing About Gen. Milley's Secret Talks With China: Report
13:13 GMTParisians Protest Against COVID-19 Health Pass, Mandatory Vaccinations
13:03 GMTLive Updates: Trump Supporters Gather for 'Justice for J6' Rally Near US Capitol
13:03 GMTK-Pop Sensation BTS Turns Celebrity Diplomats, Will Represent South Korea at the UN General Assembly
12:59 GMTPolice Scrap Request for 100 Armed National Guardsmen to Tackle Pro-Capitol Riot Rally
12:16 GMTFrench Ambassador Accuses Australia of Betrayal Before Leaving for Paris