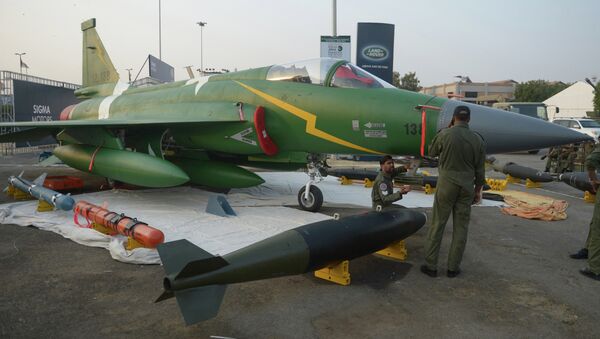 A Russian engine is being installed in Pakistan’s JF-17 Thunder fighter jet which inspires hope for cooperation between the Pakistan Aeronautical Complex and the Russian engine maker, a PAC representative said on Monday.

Russia-Pakistan Military Cooperation Not Threatening Relations With India
“As we know, a Russian engine is being installed on the JF-17 Thunder and we are looking forward to further cooperation with the engine manufacturer in Russia,” the Pakistani official told RIA Novosti news agency on the sidelines of the 2015 Dubai Air Show on Monday.
The PAC representative expressed interest in having Pakistani engine specialists undergo training in Russia and their Russian colleagues helping modernize the company’s engine-repair facilities in Pakistan.

Founded in 1971 by the Pakistan Air Force, the Pakistan Aeronautical Complex is a major aerospace, defense, aviation contractor and military corporation producing aerial systems for both military and civilian usage.