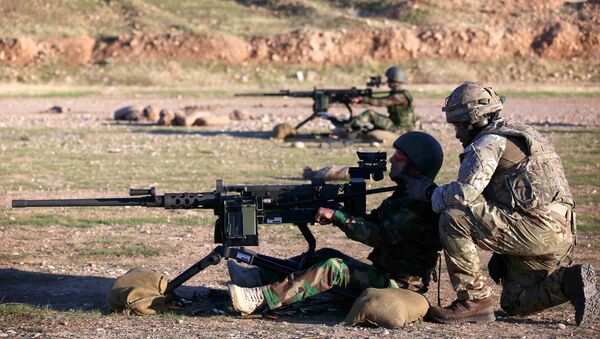 After a series of clashes, Kurdish militias began to push ISIL away from the Sinjar province of Northern Iraq, Peshmerga General Taib Abdullah Gurdy told Sputnik.

ISIL is losing a large number of fighters and heavy weaponry. During a recent military operation, Kurds managed to kill Abu Jihad, a major ISIL intelligence officer in the Sinjar province, the Peshmerga general said.

"We have regained 70 percent of Sinjar," Gurdy informed.

According to the Peshmerga general, there are no Iraqi government troops fighting against ISIL, but several units of Kurdish volunteer militia forces.

"More than 7,000 Pershmerga fighters are taking part in the operations, and another 20,000 are ready to join the fight at any given moment," Gurdy told Sputnik.

Kurds now control a road that connects Mosul and the town of Sinjar. ISIL fighters are looking for an escape, as their casualties keep increasing. General Gurdy said ISIL now has three choices left: retreat, surrender or be destroyed.

Kurdish Fighters Attempt to Recapture Town Near Syria-Iraq Border From ISIL
The accomplishments of Peshmerga forces brought hope to the hearts of the long-suffering residents of Sinjar. The majority of local residents support the Kurds and hope their anti-ISIL offensives would succeed and finally bring peace to the war-torn province.

Another Peshmerga General Kemal Kerkuri added that although Kurdish forces now control most parts of Sinjar, previously under ISIL control, a series of clashes with smaller ISIL units in the streets of the city continues.

When asked about the safety of Yazidi women and children, whom Sputnik feared ISIL could use as "human shields" to defend themselves from the attacks of Peshmerga forces, General Gurdy said that it isn't the primary concern for ISIL fighters right now, as they're seeking ways to escape advancing Kurdish forces.