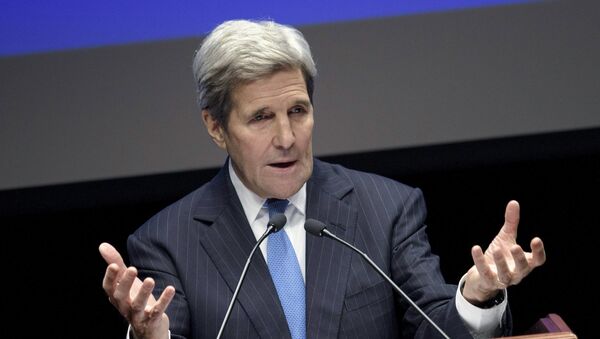 © REUTERS / Brendan Smialowski/Pool
Subscribe
Speaking at the US Institute of Peace in Washington, DC, US Secretary of State John Kerry discussed Washington’s foreign policy in Syria.

"The stakes could not be higher," Kerry said on Thursday, before insisting that the United States is "on the right track and we are making gains and we are clear on the road ahead."

The secretary of state also reiterated the Obama administration's three principle goals for ending the conflict. The first is the necessity for defeating the self-proclaimed Islamic State terrorist group, the second is the intensification of diplomatic efforts, and the third being a determination to support regional allies to ensure that Syria's instability does not spread beyond its borders.

Kerry also spent a good deal of time claiming that the Syrian government was ultimately responsible for the creation of IS. While the international community largely agrees that the principle cause for the terrorist group's formation was the instability created by the US-led invasion of Iraq, Kerry blamed local dissatisfaction with the leadership of Syrian President Bashar al-Assad.

He also stressed Washington's belief that Assad must be removed from power to ensure stability.

"Without a real transition, the fighting will continue and the war will never end," Kerry said. "If the war is to end, we must find an alternative [to Assad]."

During a press briefing Thursday morning, State Department spokesperson Mark Toner indicated that Kerry’s address would lay out the various efforts that the White House is pursuing to "bring a political resolution to the conflict."

"The focus of this speech is to lay out in a public way…what our strategy is going forward and how we’re working with the various stakeholders, what the next steps are," Toner said.

The Obama administration has faced criticism for its lack of a coherent strategy in the Syria conflict, especially after the failure of its plan to train-and-equip so-called “moderate” Syrian rebels.

The address came ahead of diplomatic talks to be held in Vienna. Concerning the Syria conflict, the summit follows similar talks held last month, from which representatives of the Syrian government were noticeably absent.

Kerry’s speech also followed the Obama administration recent announcement of a new plan to place as many as 50 US Special Forces "advisers" on the ground in the Syria, reversing a long-time pledge not to place any additional "boots on the ground" in the Middle East.

000000
Popular comments
It's very clear that the US is doing all in its power to prevent a political solution. The US is only interested in dragging this war out until either Assad is dead or there's nothing left of Syria for anyone to want.
jas
12 November 2015, 22:21 GMT2
000000
Airstrikes on ALL armed illegals in Syria.
Zhukov
12 November 2015, 23:24 GMT1
000000
Newsfeed
0
New firstOld first
loader
LIVE
Заголовок открываемого материала
Access to the chat has been blocked for violating the rules . You will be able to participate again through:∞. If you do not agree with the blocking, please use the feedback form
The discussion is closed. You can participate in the discussion within 24 hours after the publication of the article.
To participate in the discussion
log in or register
loader
Chats
Заголовок открываемого материала
Worldwide
InternationalEnglishEnglishMundoEspañolSpanish
Europe
DeutschlandDeutschGermanFranceFrançaisFrenchΕλλάδαΕλληνικάGreekItaliaItalianoItalianČeská republikaČeštinaCzechPolskaPolskiPolishСрбиjаСрпскиSerbianLatvijaLatviešuLatvianLietuvaLietuviųLithuanianMoldovaMoldoveneascăMoldavianБеларусьБеларускiBelarusian
Transcaucasia
ԱրմենիաՀայերենArmenianАҧсныАҧсышәалаAbkhazХуссар ИрыстонИронауОssetianსაქართველოქართულიGeorgianAzərbaycanАzərbaycancaAzerbaijani
Middle East
Sputnik عربيArabicArabicTürkiyeTürkçeTurkishSputnik ایرانPersianPersianSputnik افغانستانDariDari
Central Asia
ҚазақстанҚазақ тіліKazakhКыргызстанКыргызчаKyrgyzOʻzbekistonЎзбекчаUzbekТоҷикистонТоҷикӣTajik
East & Southeast Asia
Việt NamTiếng ViệtVietnamese日本日本語Japanese俄罗斯卫星通讯社中文（简体）Chinese (simplified)俄罗斯卫星通讯社中文（繁体）Chinese (traditional)
South America
BrasilPortuguêsPortuguese
NewsfeedBreaking
17:24 GMTUSAF Reveals It Has Five New B-21 Strat Bombers in Production, Not Two as Originally Reported
17:07 GMTAncient Pyramid Made From Volcanic Ash Likely Built to 'Calm Earth’s Anger,' Media Says
17:00 GMTDozens Protest Outside UN Headquarters Against US Global Military Engagements
16:43 GMTUS House Democrats Introduce Legislation to Prevent Presidential Abuses
16:35 GMTPalestinians Ready to Renew Talks With Israel If They Show Readiness, Foreign Minister Says
16:31 GMTRussian Embassy in UK Slams Scotland Yard's Approach to Fact-Finding in Skripal Case
16:30 GMTWhat's Going On? Dog Looks Terrified as It Hears People Quarrelling
16:29 GMTSpanish Press Slams Barcelona After Spanish Giants Fail to Beat Minnows Granada in La Liga
16:26 GMTUS Suddenly ‘Concerned’ About Shortages of Gas in Europe After Spending Years Fighting Nord Stream 2
16:06 GMTAUKUS Will Not Have Any Impact on Quad, Says Indian Foreign Secretary Ahead of Leaders' Summit
16:02 GMTUS Space Force Commander Claims Russia Has Armed Satellite in Orbit to Destroy US Assets
15:54 GMTLust For Money, Not Sex Game, Killed British Heiress, Swiss Court Has Heard
15:40 GMTUS Sanctions Russia-Based Cryptocurrency Exchange Platform SUEX OTC
15:29 GMTMessi to Miss PSG's Next Game Against Metz as Club Confirms Argentine's Knee Injury
15:20 GMTScientists Developing Versatile ‘Nano Couriers’ for Future Medicine
14:56 GMT'To Ban or Not to Ban': US Agencies Reportedly Split on Whether to Blacklist Huawei's Spinoff
14:28 GMTSotheby's to Hold First-Ever Art Sale Show in Post-Soviet Russia
14:19 GMTSpanish Island of La Palma's Airport Operating Normally Amid Volcano Eruption
14:11 GMTAt UN, Biden Boasts About 'Era of Relentless Diplomacy', Calls Military Power 'Tool of Last Resort'
13:34 GMT6.3-Magnitude Quake Rocks Chile