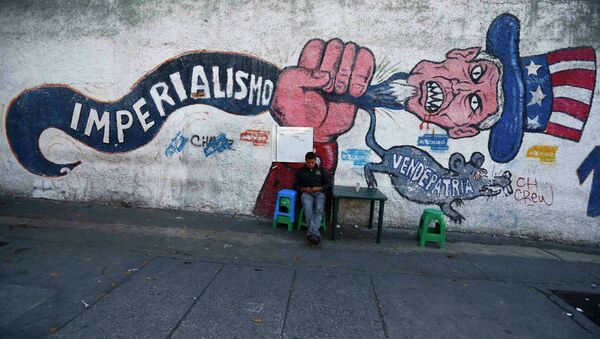 © REUTERS / Jorge Silva
Subscribe
International
India
Africa
It is becoming clear that the political and financial elites of the United States, the EU and the Gulf States are waging a proxy war against Bashar al-Assad, the people of Syria and now Russians, blocking all diplomatic avenues towards peace and even calling for "countering" Russia, US blogger Joe Contrarian notes.

We are witnessing a situation of utter collapse of local, state and global rule of law, American blogger Joe Contrarian points out, drawing attention to the fact that almost every major Western government has been recently spotted violating anti-terrorist laws, as well as freedom of speech, assembly and political dissent.

"The Western establishment chose to stand with terrorists long time ago. Not until recently that the West, so clearly, openly and unequivocally expressed its ideological, political, and military support for brutal terror of rape, murder, intimidation and slavery as well as acquiesced to a delusional dream of medieval global Caliphate which is to be founded on direct violations of every single modern Western value you can think of," Contrarian underscored in his article for Information Clearing House.

Ticking Clock: European Civilization on the Brink of Extinction?
The blogger reminded that it was the West that has long been focused on fundamental concepts of personal privacy, individual sovereignty and other basic human rights and values.

However, inexplicably, it is Western regimes which are now abandoning and violating the invaluable achievements of the Western civilization.

According to Contrarian, the present confrontation between the "West" and the "East" over Ukraine and Syria looks lika a "preprogrammed regression process" of the civilization which is moving backwards, to an outdated social system based predominantly on brutal power and "imperial dominance" rather than on democratic values.

"Barbarians are not at the gates. They are already inside," Joe Contrarian concluded.