Wolves in Sheep’s Clothing? Ukrainians Pretend to Be Gay to Enter EU 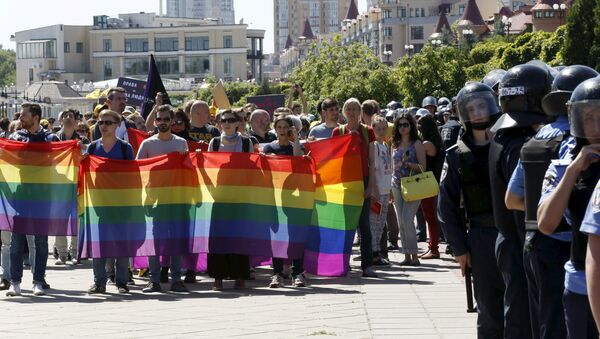 The European Union (EU) has demanded that Ukraine fix its labor code to stop the discrimination of gays and other minorities in the country, Regnum News Agency reported.

Eight members of the EU are concerned with an increasing number of Ukrainian citizens who are coming to the EU and asking for refugee status, pretending to be gay, said Yuri Lutsenko, the leader of the Block of Petro Poroshenko Party, as cited by Regnum.

Once in the EU, these Ukrainians apply for asylum, stating that they can't find employment in their native country due to Ukraine's labor laws being discriminatory.

"According to the letter of Mr. Juncker [the President of the European Commission], eight EU countries want Ukraine to clarify the country's labor code, which states that when seeking employment Ukrainians aren't discriminated against in any way, including on the basis of their sexual orientation," Lutsenko said, as cited by Regnum.

Right Sector vs. Gays: Leader Pledges to Defend Ukraine From LGBT Invasion
Since Ukrainian gays or alleged gays can, for example, go to the Netherlands and automatically receive asylum, the Dutch government wants to clarify if that is the case, Lutsenko said.

The leader of Petro Poroshenko's party also added that he personally doesn't support the "LGBT-lifestyle," but said he'd rather see a "gay-parade on Khreschchatyk Street [one of the main streets in Kiev] than Russian tanks in the center of the Ukrainian capital."

Despite the efforts of senior EU officials, earlier this week the Ukrainian parliament rejected a law to ban all forms of discrimination in the workplace. The bill only received 207 of the 226 votes required for approval.