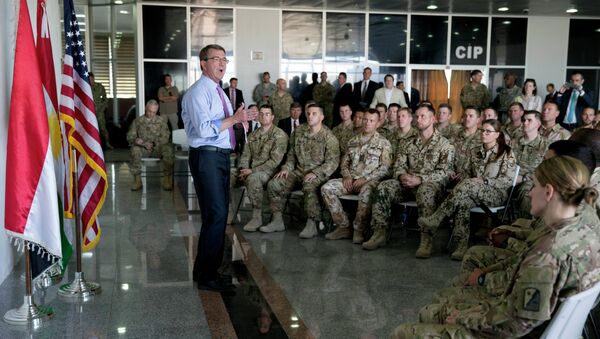 © AFP 2021 / POOL / CAROLYN KASTER
Subscribe
Washington can't bear the thought of other powers rising and challenging its global hegemony, US author Stephen Lendman notes; how far will US neocons go to maintain dominance?

It seems that Washington is unable to reconcile itself with the thought that the so-called American Century is over now.

"Russia, China and the vast majority of other countries support a multi-polar world, nations working cooperatively with each other in peace for the betterment of all. Washington wants none of it, demands all other countries accept its dominance, obey its diktats, pay homage to the master of the universe — or else," Lendman writes in his latest piece for Global Research.

"For the first time in NATO's history, we are under pressure on two flanks," former top US Defense Department official Alexander Vershbow warns, as quoted by Lendman.

According to Vershbow, on the one hand Europe is being threatened by Middle Eastern chaos and violence, on the other — "a newly assertive Russia" is attempting to undermine the foundations of the post-Cold War order."

"Russia seeks a return of the Great Game of influence and control over (nations) weaker than itself. This is not a game we wish to play," the Pentagon official elaborates.

Unsurprisingly, the story of the US' role in instigating the Middle Eastern crisis remains swept under the carpet, as well as the story of NATO's provocative saber-ratting and muscle-flexing in Eastern Europe, in close proximity to Russia's borders.

How the 2008 Syrian Drought Fit US Geopolitical Plans in Middle East
Much in the same vein, US Defense Secretary Ashton Carter warned the public about the imaginary threat posed by Russia while addressing the Reagan National Defense Forum on November 7.

In addition to the myth of Russia's aggression against the Baltic states, Ukraine and Georgia, Carter noted that "in Syria, Russia is throwing gasoline on an already dangerous fire, prolonging a civil war that fuels the very extremism Russia claims to oppose."

"When lunatics run the asylum, all bets are off. America can't bear the thought of other rising powers challenging its uni-polarity — so much so, it appears willing to risk humanity's destruction to maintain sole dominance over planet Earth, its resources and populations," Lendman pointed out.

Stephen Lendman deems that Washington has de-facto declared a proxy war on Russia in Syria. The same political approach has been recently adopted toward China in the South China Sea by "entering its waters provocatively on the phony pretext of free navigation," he noted.

In general, US war hawks are currently risking to enflame the two simultaneous conflicts with the two global powers. The question remains open regarding how far American neocons can go while trying to maintain Washington's dominance.