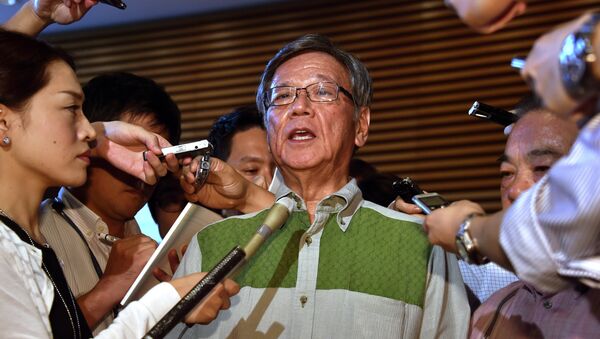 A refusal by Japan’s Okinawa Prefecture to Tokyo's decision to resume work on transferring the Futenma US military base is legitimate and just, Governor Takeshi Onaga said Wednesday.

Okinawa Officials Challenge Tokyo Decision to Resume US Base Transfer
MOSCOW (Sputnik) — In late October, the Japanese government resumed construction of a US military base in Okinawa, having negated a regional government veto on its relocation from Okinawa's highly-populated district in the city of Ginowan to the Henoko coastal area of Nago city.

"Cancellation of the [Tokyo's] permission [to resume constructions] is lawful and just," Onaga said at a press conference, as quoted by the Japanese Kyodo news agency.

On Monday, Minister of Land Keiichi Ishii sent recommendations to refrain from opposing the base relocation to Onaga. The recommendations contradict the principals of  self-administration, according to the governor.

The Supreme Court is expected to review the dispute next week, according to the agency.