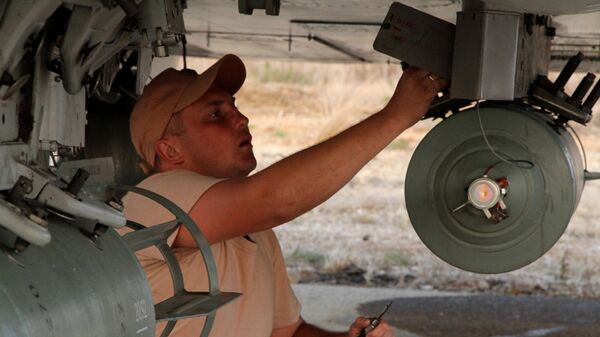 The Russian military operation in Syria has been underway for over one and a half months. Alongside with achieving its military goals, Moscow now has the perfect chance to showcase its weapons and military hardware to potential buyers, Deutsche Welle reported.

Weapons Russia is Using to Attack ISIL Militants in Syria
On September 30, Russia launched airstrikes against the Islamic State (ISIL) terrorist group in Syria at the request of President Bashar al-Assad. Since then, according to different estimates, Russia has deployed nearly 60 jets and helicopters to Syria.

The operation mostly involves warplanes and helicopters developed in the Soviet era and then modified to some extent. Among them are Su-24M bombers, Su-25SM ground attack jets, Su-30SM multirole fighters, Mi-24 attack helicopters and Mi-8 multirole helicopters. In addition, the offensive involves the Su-34 4+-generation multirole jet fighter which entered service in the Russian Armed Forces in 2014.

The Russian military operation in Syria is not expected to be long-term, six months – maximum, Ulrich Kuhn, an expert at the Institute for Peace Research and Security Policy in Hamburg, told Deutsche Welle.

Russian Air Campaign's Length Depends on Syrian Army Offensive - Kremlin
"That can be proven by the fact that Russia has deployed a small amount of weapons and troops to Syria. At the same time, different types of jets and helicopters are used," he said.

He assumed that the Russian operation is also aimed at promoting the military capabilities of Russian weapons.

The assumption was backed by Simon Vezeman, a researcher at the Stockholm International Peace Research Institute.

According to him, Russia is trying to achieve its geopolitical and military goals in Syria as well as promote its military hardware.

"Potential buyers can see how Russian military equipment works not at arms shows, but in real life," the analyst told Deutsche Welle.

According to official data, in 2014, Russia arms exports reached $15 billion.

Now, it seems the "promotional" campaign has already yielded the first results. In late-October, Sergei Semka, Deputy Governor of Russia’s Novosibirsk Region, announced new contracts had been agreed on the export delivery of Su-34 jets.