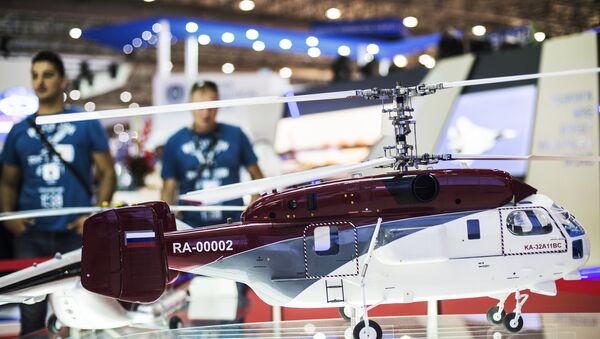 A draft intergovernmental agreement on the development of a Russian-Chinese heavy helicopter and a long-haul aircraft is completed.

DUBAI (Sputnik) — A draft intergovernmental agreement on the development of a Russian-Chinese heavy helicopter and a long-haul aircraft is completed, and discussion of the commercial details of the deal is underway, Russian Deputy Minister of Industry and Trade Andrei Boginsky said Tuesday.

"A draft intergovernmental agreement on heavy helicopter and wide-bodied aircraft has been prepared and today the United Aircraft Corporation (UAC) and Russian Helicopters are carrying out active discussion arranging commercial agreements with their counterparts from China," Boginsky told journalists at the Dubai Airshow-2015.

He added that Russia would like to provide engines for both projects. According to the official, the helicopter could be equipped with a PD-12V turboshaft engine and the aircraft could be provided with a new motor unit based on the Russian PD-14 turbofan engine.

China, Russia Double Trade Transactions in National Currencies
Russia’s UAC said in September that a blueprint for the Russian-Chinese long-haul passenger airplane would be approved by March 2016, with an intergovernmental agreement this year.

The project, developed with the Commercial Aircraft Corporation of China (Comac), is estimated at $13 billion. The first test flight is expected in 2021.

The Russian Helicopters aircraft maker said in September it would strike a deal by the end of 2015 to build a brand new heavy-lift helicopter "from scratch," after they inked a framework cooperation agreement in May.