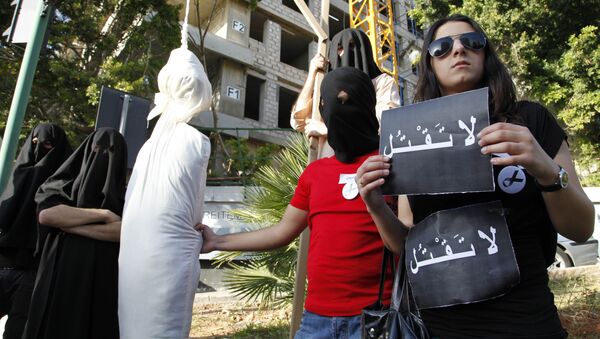 The figures on capital punishment coming out of Riyadh are staggering: there have been more than 150 people already executed in the kingdom in 2015, far more than in years past, according to Amnesty International.

21st Century Justice: Saudi Arabian Court to Kill Youth by Crucifixion
This year has seen 151 individuals put to death in Saudi Arabia, and there are more to come, Amnesty reported on Monday. The usual annual figure comes in at around 90 people.

Some experts claim a clear connection can be made with the current security situation in the region – wars, political turbulence and tragic incidents involving civilians.

Another explanation is that there have been more judges appointed in the country in 2015, allowing for the hearing of a backlog of appeal cases, Reuters reported.

“Death sentences in Saudi Arabia are frequently imposed for non-lethal offences, such as drug-related ones, and after unfair trials which lack basic safeguards for fair trial provided for under international human rights law and standards,” Amnesty described in an August report.

Killing in the Name of… ‘Justice’: Horror Over Saudi Executions
The last time that the number of executions in the kingdom was higher dates back to 1995, when 192 death sentences were enforced, the international watchdog wrote, referencing its own records.

In 2014, Saudi Arabia was among the top three countries with the highest execution rates, after China and Iran. Iraq and the US came in fourth and fifth. These five countries had also executed the most prisoners in the first six month of 2015, Amnesty International stated in July.

The international watchdog highlighted that the death penalty is disproportionately used against foreigners in Saudi Arabia.

“Foreign nationals, mostly migrant workers from developing countries, are particularly vulnerable as they typically lack knowledge of Arabic and are denied adequate translation during their trials,” the report read.

UN Human Rights Experts Urge Saudi Arabia to Halt Execution of Minors
Shia Muslims are also specifically targeted by political executions in the country, Amnesty added, and also slammed the kingdom for executing people under the age of 18.
UN human rights experts have called on the Saudi government to stop the execution of minors, pointing to the case of Ali Mohammed Nimr, who was convicted for protesting when he was a teenager, a statement from the UN Office of the High Commissioner for Human Rights (OHCHR) issued in September said.

“Ali Mohammed al-Nimr, a high school student, was arrested in 2012 by the Saudi authorities when he was 17 for his participation in Arab Spring protests in Qatif, Eastern Province. During his arrest and detention, he was reportedly subjected to torture and ill treatment by the General Investigation Directorate … In May 2015, the Specialized Criminal Court (SCC) sentenced Mr. al-Nimr to death… and confirmed its sentence in September.”

Defenders of Saudi execution practices argue that beheadings with a sword – more precisely, a sabre – are more humane than the lethal injections widespread in the US, according to Reuters.