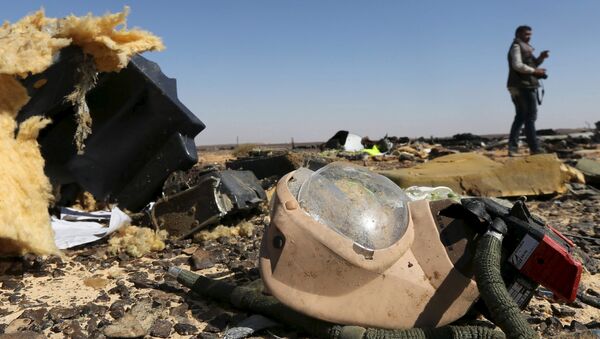 © REUTERS / Mohamed Abd El Ghany
Subscribe
British newspaper The Sunday Times has revealed who allegedly planted a bomb aboard the Russian plane which crashed in Egypt on October 31, naming him as Abu Osama al-Masri, an Egyptian cleric and the frontman of an ISIL-offshoot group.

"The man known as Masri claimed responsibility for the Russian plane crash in an audio statement last Wednesday — the same day that David Cameron announced the suspension of British holiday flights to Sharm el-Sheikh," the newspaper says.

The statement, entitled "We Downed It, So Die in Your Rage", was issued on 4 November, challenging Egyptian authorities to "prove we did not." It further said it would reveal its modus operandi in due course.

#IS in #Sinai announces a new audio message on the #Russia|n plane crash: "We downed it, so die in your rage" pic.twitter.com/tKV1Yx2Z3h

The outlet says that Whitehall officials confirmed this weekend that Masri is a "person of interest" in the crash and that Britain would help Egypt or Russia in a "kill or capture" mission.

Abu Osama al-Masri is an Egyptian cleric and frontman of the Wilayat Sinai (Sinai Province) group, now considered a branch of ISIL after brokering a pact with the terrorist organization last year in Syria.

Militants Allegedly Linked to A321 Plane Crash Spoke in British Accents
Some experts, however, have questioned the militant group's claim of responsibility, pointing out that it has failed to provide any proof.
Intelligence officials believe that Masri's group used an airport insider to smuggle a bomb into the luggage hold of the Metrojet aircraft last Saturday. It is feared the suspect is still at large, the report said.

Sinai Province's leader is a former clothes importer known by his alias Abu Osama al-Masri. The 42-year-old is a former scholar of the al-Azhar University in Cairo, a 1,000-year-old Sunni Muslim institution that gave an honorary doctorate to the Prince of Wales in 2008.

Meanwhile, British officials are investigating if any Britons allied to ISIL were involved after claims that the security services had intercepted "chatter" between extremists with London and Birmingham accents in the aftermath of the explosion.