© Sputnik / Kirill Kallinikov
/
Go to the photo bank
Subscribe
Russian representatives at the 2015 Dubai Airshow have reported particular interest in its Mi-35 combat helicopter, especially from the Bahraini and Pakistani delegations.

Russian Helicopters Conquering New Markets, Talking Import Substitution
The Russian delegation to the 2015 Dubai Airshow have reported significant interest in Russia's Mi-35 combat helicopters, with Bahrain and Pakistan among the Air Forces looking to add the aircraft to its ranks.

Rostec representatives told RIA Novosti in Dubai that it had reached agreement with the Pakistani Air Force for the delivery of several Mi-35 helicopters.

"We have signed a contract with Pakistan for the Mi-35, deliveries will begin next year," Sergey Chemezov, Rostec general director, told RIA Novosti in Dubai.

Sukhoi May Deliver SSJ-100 to Iran After Sanctions Lifted
In addition to the agreement with Pakistan, the Bahraini Air Force has also expressed strong interest in the Mi-35, the export version of the Russian Mi-24 helicopter, which is currently in service with the air forces of more than 30 nations, including Brazil, India and Venezuela.

The attack helicopter is equipped with guided anti-tank missiles and unguided rockets, and also can be used to transport eight paratroopers with equipment, or military cargo. 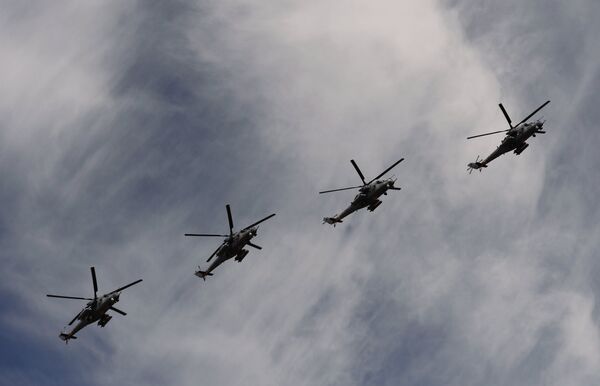 Mi-35 Hind helicopters at the military parade to mark the 70th anniversary of Victory in the 1941-1945 Great Patriotic War
© Host photo agency
/
Go to the photo bank
"The Bahraini Air Force Delegation visited the 'Rosoboronexport' [Russian defense exports] stand [at the airshow] where they expressed interest in the Mi-35 helicopter," a representative from the Russian delegation told RIA Novosti on Monday.

"They received an exhaustive consultation about the technical characteristics and military use of the helicopter. Generally, the Bahraini representatives expressed the desire for more talks at a later date," the source revealed.

The discussions in Dubai follow an agreement Russia and Bahrain signed in May to strengthen their military-technical cooperation, in the course of talks held in Bahrain that the Bahraini ambassador to Russia called "very productive."

In July a delegation from Bahrain visited Russia to observe the 2015 Aviadarts international military aviation competition, which featured Mi-35, Mi-8 and KA-52 helicopters, as well as nine fighter jets, including the Su-27 and Su-34. 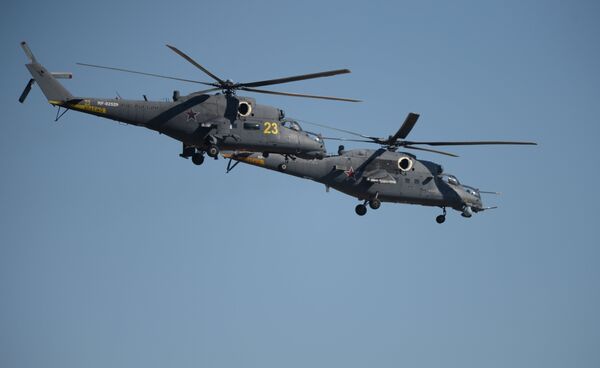 On Sunday, head of the Iraqi parliament's defense and security committee Hakim al Zamili announced that the Iraqi air force had taken delivery of Russian Mi-28 and Mi-35 helicopters, part of a military equipment agreement worth $4.2 billion that the two countries signed in 2012.

"They [the Russian helicopters] will help Iraq to gain the upper hand in the fight against terrorist groups," said al Zamili, who added that Iraq is also hoping to add Russian tanks, armored transport vehicles and the Kornet anti-tank missile system to its armory.