Russia, China Offer a Beacon of Hope for Developing Nations of World 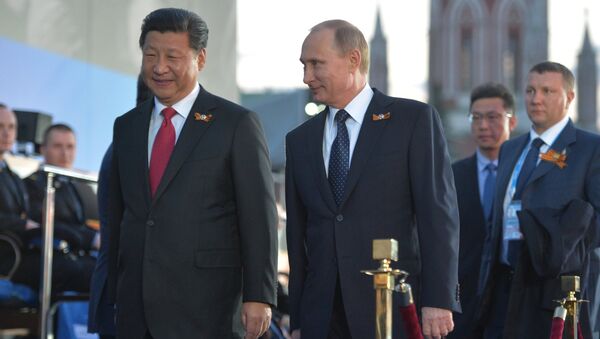 © Sputnik / Alexei Druzhinin
/
Go to the mediabank
Subscribe
International
India
Africa
Western imperialist powers have no scruples about violating sovereignty of developing countries and destroying nation-states, Venezuelan journalist Manuel Taibo notes, adding that Russia and China offer a beacon of hope for nations which seek to sustain their independence.

The modern neocolonial strategy adopted by leading capitalist powers and multinational corporations is aimed at extracting the resources of developing nations, Venezuelan journalist and writer Manuel Taibo underscores, adding that Washington uses "treacherous techniques" to pursue their interests, in particular military actions against regimes that refuse to bow before US political elite.

"These processes lead the US's ruling elite to put the selfish interests of industrial-military circles over the interests of all mankind, and even over their own people," Taibo writes in his article for Aporrea.

NATO? Montenegro is 'Suffering From Cancer Epidemic They Triggered'
"It becomes more evident day by day that the Washington's elite keep moving along the militaristic line, they are looking outwards, searching for new countries and nations to impose its hegemony on," the journalist emphasizes.

Taibo pointed out that, in the Middle East, US war planners are trying to drive a wedge between different religious groups and nation-states by triggering a severe sectarian strife. US policymakers are using various tools to pressure nations into submission including military actions against undesirable regimes, economic sanctions and debt pressure.

According to the Venezuelan journalist, a strikingly similar situation could be observed in Latin America, Africa, Southeast Asia and South Asia, as well in the small states of the Pacific and Indian Oceans.

"Now that is the real face of the new global paradigm," the journalist stresses, adding that "everything else that comes along with these actions is simply an ideological wrapping that covers up the true motifs."

'Russian Threat': An Excuse for Pentagon's Expensive Nuclear Modernization
Taibo underscored that it is inacceptable to ignore the role of the world's nation-states and their leaders. According to Taibo, the state should remain "the guardian of the social pact," and the "tool for social management."

"[State's] interests are no different from its people, because without people it has no life or existence," the Venezuelan journalist highlights.

In contrast, Russia and China are ready to cooperate with other nations on an equal basis, respecting their sovereignty and independence.

"The louder the voice of Russian Federation and the People's Republic of China, the more attractive is their lead to pick up the independent foreign policy and reject imperialistic interference," Taibo points out.

Since Russia and China are guided by the principles of equality and mutual respect of interest they have an opportunity to become even more powerful players on the international arena, the journalist believes.

Still no one can put into question Russia's and China's significant contribution to world peace, he added.

"Live free or live dead!…  We live in interesting times, yet it is tough," Manuel Taibo remarks.