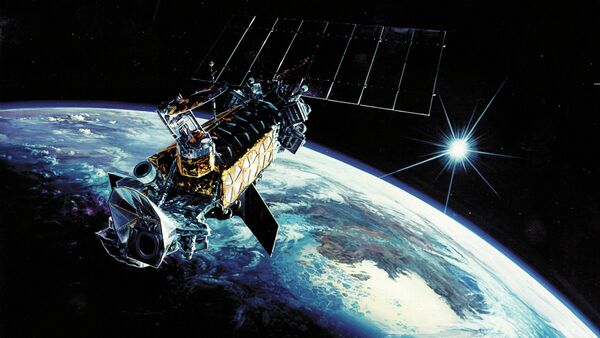 © Photo : US Air Force
Subscribe
China last month conducted a test of a new missile capable of taking out US satellites as a part of Beijing’s growing arsenal in space warfare.

The test of a Dong Neng-3 exoatmospheric vehicle took place on October 30, and was conducted from the Korla Missile Test Complex in western China, according to two defense officials who spoke to the Washington Free Beacon.

The Chinese media reported on November 1 that the test was of a missile defense interceptor, but the defense officials said the missile is a direct-ascent type designed to destroy satellites.

US State Department and Pentagon officials declined to comment on the test to the paper.

A Chinese Embassy spokesman said: "I don't have detailed information about the missile test you mentioned."

"China advocates for the peaceful use of outer space, and opposes space weaponization or arms race in space,” the spokesman said in an email.

Chinese media site Guancha.com reported on November 1 regarding the unusual contrails near the city of Korla in Xinjiang province from the test, stating that they seemed to be signs of "a midcourse anti-missile test."

Days later, on November 4, Hong Kong-based newspaper Ming Pao reported that a "final-phase missile interception test had been conducted in the upper atmosphere."

"The capability to intercept was one of the capabilities of the PRC Hongqi-19 missile, and may be employed to intercept high supersonic gliding targets on the offensive," reported the paper.

A forthcoming report by the US-China Economic and Security Review Commission in Congress states that the Chinese tests of supposed anti-missile defense systems, such as the one in the new test, are indeed meant to shoot down satellites, according to the Free Beacon.

The recent DN-3 test is the eighth anti-satellite missile test China has conducted, according to the Congressional report.

000000
Popular comments
I believe Beijing's will do the best for its country. The leaders in Beijing are very wise and thinking for the future long in advance !!! There let the USA talk and the leaders in China smile and think this poor ba.... are idi.....
tobi.gelando
10 November 2015, 14:22 GMT1
000000
Nothing new here. The U.S. and Russia have long had the ability shoot down each other's satellites (at the least the ones in low-earth orbit). China is just playing catch up to the other two. The U.S. (and probably Russia also) have already made contingency plans for this. U.S. aircraft carriers carry back-up satellites that they can launch into low-earth orbit. It takes significant calculation and timing to shoot down an orbiting satellite. The U.S. is pretty confident that in a war scenario, they can launch new satellites faster than China can shoot them down. Of course, the space junk debris gets to be a problem after a while.
coolerheads
11 November 2015, 23:58 GMT
000000
Newsfeed
0
New firstOld first
loader
LIVE
Заголовок открываемого материала
Access to the chat has been blocked for violating the rules . You will be able to participate again through:∞. If you do not agree with the blocking, please use the feedback form
The discussion is closed. You can participate in the discussion within 24 hours after the publication of the article.
To participate in the discussion
log in or register
loader
Chats
Заголовок открываемого материала
Worldwide
InternationalEnglishEnglishMundoEspañolSpanish
Europe
DeutschlandDeutschGermanFranceFrançaisFrenchΕλλάδαΕλληνικάGreekItaliaItalianoItalianČeská republikaČeštinaCzechPolskaPolskiPolishСрбиjаСрпскиSerbianLatvijaLatviešuLatvianLietuvaLietuviųLithuanianMoldovaMoldoveneascăMoldavianБеларусьБеларускiBelarusian
Transcaucasia
ԱրմենիաՀայերենArmenianАҧсныАҧсышәалаAbkhazХуссар ИрыстонИронауОssetianსაქართველოქართულიGeorgianAzərbaycanАzərbaycancaAzerbaijani
Middle East
Sputnik عربيArabicArabicTürkiyeTürkçeTurkishSputnik ایرانPersianPersianSputnik افغانستانDariDari
Central Asia
ҚазақстанҚазақ тіліKazakhКыргызстанКыргызчаKyrgyzOʻzbekistonЎзбекчаUzbekТоҷикистонТоҷикӣTajik
East & Southeast Asia
Việt NamTiếng ViệtVietnamese日本日本語Japanese俄罗斯卫星通讯社中文（简体）Chinese (simplified)俄罗斯卫星通讯社中文（繁体）Chinese (traditional)
South America
BrasilPortuguêsPortuguese
NewsfeedBreaking
Yesterday‘Crisis Crisis’: Trump Says US Becoming ‘Cesspool of Humanity’ Over Border Situation
YesterdayFBI: Human Remains Found in Wyoming 'Consistent With Description' of Missing Gabby Petito
YesterdayFrance-UK Defense Minister Meeting Canceled Over AUKUS Fracas - Report
YesterdayFrench Highliner Stops Parisians’ Hearts Crossing Seine 200 Feet Up
YesterdayUnited Russia Leads in Russian General Election With 42% of Vote
YesterdayCelebs Go Skating Host Hopes to Sign Prince Harry & Meghan Markle for the Show, Media Says
YesterdayLetters From Jehovah’s Witnesses in England Blame COVID Pandemic on Satan, Media Says
YesterdaySatellite Snaps Appear to Show Expansion of North Korea’s Nuclear Bomb-making Capabilities
YesterdaySylvain Mbappe: Satirical Website Offers Alternatives to 'Non-French' Names
YesterdayUnited Russia Party Leads in Parliamentary Elections With Over 12% of Ballots Counted - Exit Poll
YesterdayRussian Embassy in Paris Says Checks Info About Russian Man Arrested for Shooting Air Gun
YesterdayVoter Turnout in Russian Parliamentary Elections Exceeds 45%
YesterdayMany Haitians in Texas Border Camp Unwilling to Leave Despite US Deportation Plans
Yesterday‘Are You Undercover?’ Watch Police Detain Suspicious Man with Badge and Gun at DC Protest
YesterdayTaliban Fighters Seen Riding Swan-Shaped Pedal Boats - Photo
YesterdaySeveral Injured as Military Plane Crashes in Lake Worth, Texas, 'Heavily Damaging Two Homes'
YesterdayDaesh Claims Responsibility For Attacks in Eastern Afghanistan
Yesterday800+ Naked Swimmers Celebrate Approach of England's Autumn Equinox
YesterdayUS National Whelan Tells Family About Physical Assault in Russian Prison
YesterdayDems Reportedly Mulling Ploy to Defuse Debt Ceiling Stand-off with GOP to Avert Gov't Shutdown