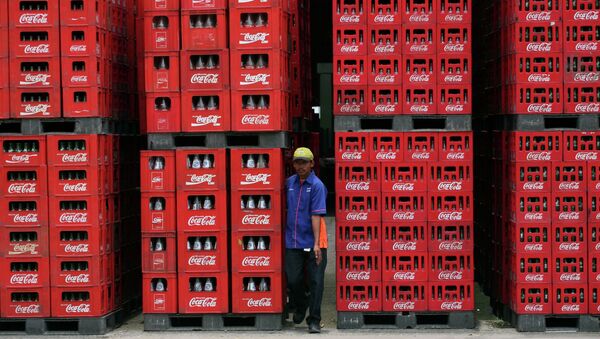 © AP Photo / Achmad Ibrahim
Subscribe
The University Of Colorado School Of Medicine has returned a $1 million grant to the Coca-Cola Company after media outlets raised concern that the money was used to fund an advocacy group that downplayed the link between obesity and soft-drink consumption.

Coke donated the money in 2014 to establish the Global Energy Balance Network, a non-profit organization that encourages people to focus more on tackling excessive weight gain by focusing more on exercise than a healthy diet.

Coca-Cola Pays Dietitians to Present Soda as Healthy Snack
In August, the group was covered by the New York Times in an article which voiced concerns that Coke was establishing financial ties with scientists and health organizations to drive obesity research away from high-calorie soda consumption.

That month, the Center for Science in the Public Interest got 37 scientists and public health authorities to sign a letter accusing the network of “peddling scientific nonsense.”

Steven Blair, an exercise scientist who served as the network’s vice president, defended the organization in a video which criticized the media for blaming fast food and sugary drinks for the country’s high obesity rates with “virtually no compelling evidence that that, in fact, is the cause.”

Coca-Cola vs Rusty Nail: Bye-Bye, Corrosion!
On Friday, the University of Colorado School of Medicine said it was returning the money because the “the funding source has distracted attention from its worthwhile goal.”

“The School of Medicine and physicians and researchers on the University of Colorado Anschutz Medical Campus are making significant contributions to the understanding of and care for these health-related issues and the source of funding for the network should not distract from their efforts.”

Muhtar Kent, Coke’s chief executive, responded to the New York Times article by stating the company had spent $120 million since 2010 to combat obesity through funding research and establishing partnerships with medical groups. Its recipients included the American Academy of Pediatrics, which accepted $3 million; and the Academy of Nutrition and Dietetics, the country’s largest group of dietitians, which had received $1.7 million.

Afterward, both groups said they planned to end their relationship with Coke.