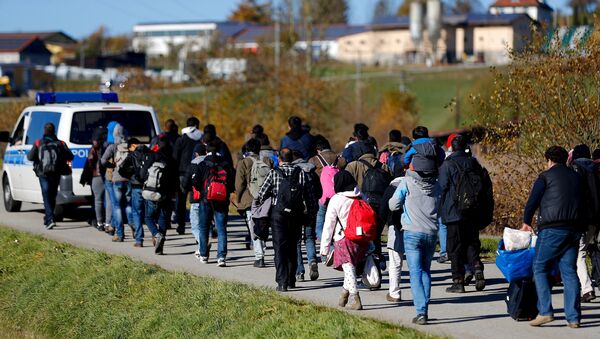 © REUTERS / Michael Dalder
Subscribe
The German government received warning as early as spring from Frontex, the EU's border agency, that record numbers of migrants and refugees were planning to cross the Mediterranean from Libya, as well as information about the travel plans of thousands of Kosovans.

Tusk Demands Tougher Border Controls in Germany Amid Migrant Crisis
The German government was warned in spring that up to one million people from Africa and the Middle East were preparing to travel from Libya to Europe, the German press reported on Sunday.

The German government has been criticized for not making necessary preparations for the migrant crisis faced by the European Union this year, which has led to Germany agreeing to take in a million or more asylum seekers this year.

Welt am Sonntag reports that the critics are on solid ground, since the German government was warned by Frontex, the agency which manages the EU's borders, as far back as spring about the record numbers of refugees and migrants planning to come to Europe.

German Labor Minister Hopes Migrants May Boost Economic Growth
A source told the newspaper that in March, Frontex head Fabrice Leggeri warned that a record number of refugees and migrants were in North Africa, and planning to come to Europe.

"Our sources tell us that that between 500,000 and one million migrants are ready to leave Libya," Leggeri is said to have told Germany's federal government in March.

In June, Leggeri gave another warning, telling Bundestag deputies at an internal meeting about record numbers of illegal border crossings by migrants in the Balkans. The numbers involved were forwarded to the Ministry of the Interior, and the Federal Chancellery.

"Irregular border crossings from Turkey into Greece have risen by 550 percent in comparison with last year," Welt am Sonntag reported Leggeri told the deputies.

As well as notice about the flow of migrants from North Africa and the Middle East, a source also told the newspaper that the German government was also warned about migration from Kosovo.

Germany's representatives in the region wrote to the German Foreign Office in February to warn that "800-1,000 (plus underreporting) Kosovars daily" were on their way to Germany, migrating via Serbia and Hungary.

The report warned that by the end of the year, the number of Kosovan migrants to Germany could reach "300,000 people, that is, one sixth of the population" of Kosovo.

000000
Popular comments
Don't tell me it was not already planned by the european elite in order to lower wages! Since most of them have no education or not that much.....Hello pauperization!

8 November 2015, 17:37 GMT3
000000
Aon Duine, I'm pretty sure it will end up in clashes. Extremists "refugess" VS the natives or the natives VS their own government because it will be a treason from said government. The future in the eu is not very shiny. (But in order to vote they should have a job and a citizenship? They can't vote like that isn't?)