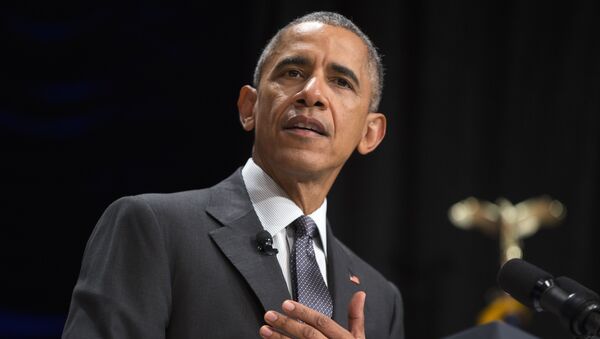 © AP Photo / Evan Vucci
Subscribe
The lax approach by the US toward terrorism may provoke serious consequences, just like the incompetence of US authorities in 2001 let Al-Qaeda off the leash, leading to the September 11th terrorist act, former CIA analyst Fred Fleitz believes.

White House strategy in Syria and Iraq shouldn't be called "policy" in the first place, because it's hard to do less for those countries suffering from endless chaos. It seems like Obama will leave the mess for the next president, Fleitz, current Senior Vice President for Policy and Programs with the Center for Security Policy, told Fox News.

US Intensifies Proxy War in Syria to Counter Russia’s Direct Approach
The Obama administration announced major changes in its policy toward the Syrian crisis and ISIL terrorist threat twice in two years. However, both times it was nothing more than attempts to burnish the reputation of America's government after it had been humiliated. Both times, the world community took those attempts for evidence of US weakness and indecisiveness, the analyst explained.

The first "shift" in US foreign policy was marked during Obama's September 10, 2014 speech, following a series of public executions by ISIL. Obama announced his readiness for complete victory over the terrorists with airstrikes in Syria and Iraq, along with a plan to train-and-equip "moderate" rebels and enhancing support for the Iraqi Army.

"The failure of the September 2014 policy shift was obvious soon after it began," Fleitz said. "Pinprick airstrikes in Syria did not stop ISIS from making gains on the ground.  In Iraq, ISIS took the city of Ramadi last May despite being outnumbered 10-1 by the Iraqi army.  The Iraqi army and the Iraqi Kurds clamored for more arms while the Obama administration sat on its hands."

The next indication of Obama's policy collapse came to light this fall when a US $500 million train-and-equip program failed, and Russia started its air campaign in Syria along with Iran expanding its presence in Syria.

"Russian President Putin mocked and ignored President Obama as he sent Russian forces into Syria," Fleitz noted. "An intelligence sharing agreement was signed between Russia, Syria, Iraq and Iran.  Iraqi lawmakers even called on Russia to conduct airstrikes against ISIS positions in their country."

US-Led Coalition Against ISIL Launches 23 Airstrikes in Syria, Iraq
The Obama administration's response to this failure was another foreign policy shift, which could have even worse consequences than the first one. Without any clear strategy, Obama sent "less than 50" elite force groups to help Syrian rebels. Then it turned out that elite US military forces have been consulting Kurds, a group with their own interests in Syria apart from fighting ISIL. Additionally, Turkey has shown their own displeasure with US support for Kurdish forces.

US allies understand that Obama's "policy" is just a way to stall for time before his presidency comes to an end. Then he'll be able to say that at least he "tried" to do something about the situation, Fleitz explained. And this is why the power dynamics are changing in the region.

"Russia is filling a power vacuum in the region and is building a new alliance with Iraq, Iran and Syria," the analyst explained. "Russia has improved its relations with Egypt and Israel."

According to Fleitz, the president's policy of idle resistance in the fight against terrorism may have dangerous consequences and lead to a September 11th scenario.

000000
Popular comments
So, the Outlaw Empire's going to attack itself again; why? All of its announced goals were made possible by executing Operation Northwoods, its previously planned false flag designed to facilitate an attack on Cuba. I suspect hot air from a supposedly ex-CIA source.
karlof1
9 November 2015, 01:15 GMT
000000
Fred believes that if the US can just kill enough people, then there'll be peace. Logic of a crazy person. Anyone who think the US is too peaceful has his head too far up his own butt to see much light.
jas
9 November 2015, 01:23 GMT2
000000
Newsfeed
0
New firstOld first
loader
LIVE
Заголовок открываемого материала
Access to the chat has been blocked for violating the rules . You will be able to participate again through:∞. If you do not agree with the blocking, please use the feedback form
The discussion is closed. You can participate in the discussion within 24 hours after the publication of the article.
To participate in the discussion
log in or register
loader
Chats
Заголовок открываемого материала
Worldwide
InternationalEnglishEnglishMundoEspañolSpanish
Europe
DeutschlandDeutschGermanFranceFrançaisFrenchΕλλάδαΕλληνικάGreekItaliaItalianoItalianČeská republikaČeštinaCzechPolskaPolskiPolishСрбиjаСрпскиSerbianLatvijaLatviešuLatvianLietuvaLietuviųLithuanianMoldovaMoldoveneascăMoldavianБеларусьБеларускiBelarusian
Transcaucasia
ԱրմենիաՀայերենArmenianАҧсныАҧсышәалаAbkhazХуссар ИрыстонИронауОssetianსაქართველოქართულიGeorgianAzərbaycanАzərbaycancaAzerbaijani
Middle East
Sputnik عربيArabicArabicTürkiyeTürkçeTurkishSputnik ایرانPersianPersianSputnik افغانستانDariDari
Central Asia
ҚазақстанҚазақ тіліKazakhКыргызстанКыргызчаKyrgyzOʻzbekistonЎзбекчаUzbekТоҷикистонТоҷикӣTajik
East & Southeast Asia
Việt NamTiếng ViệtVietnamese日本日本語Japanese中国中文Chinese
South America
BrasilPortuguêsPortuguese
NewsfeedBreaking
18:48 GMT'Sending a Message': Space Force General Claims US Satellites Are Attacked on Daily Basis
18:47 GMTCalifornia Officials Reportedly Identify First Case of Omicron Covid Variant in United States
18:33 GMTRepublicans Fear 'Civil War' in Wake of Ilhan Omar Scandal, Voice Concerns About 2022 Midterms
18:05 GMTDeath Toll From Michigan High School Shooting Rises to 4
17:05 GMTWhat Pushed Donald Trump to View US Intelligence Community With Suspicion During His Tenure
16:42 GMT'Melding of Services': Australia Won’t Lose ‘Sovereignty’ Under AUKUS, says Biden’s 'Asia Tsar'
16:42 GMTIndia's Top Car-maker Maruti Suzuki's November Sales Down 9% On Chip Shortage
16:23 GMTMassive 'Potentially Hazardous' Asteroid 'Taller Than Chrysler Building' To Approach Earth Next Week
15:38 GMTUK Parliament Reportedly on Lockdown After Man Cycles Through Security Gates - Photos
15:34 GMTUS School Shootings on the Rise After Pandemic-Caused Hiatus
15:23 GMTDominic Raab Under Pressure To Bring In UK Child Cruelty Register After Approving ‘Tony’s Law’
15:08 GMTRonaldo's Bodyguards Investigated in Portugal Over Suspicion of Illegal Work – Report
14:46 GMTAnother UK Energy Supplier Pushed Out of Market by High Gas Prices
14:41 GMTAntony Blinken: US Preparing Additional Sanctions on Belarus in Coordination With EU
14:27 GMTRussia Contracts Full Cycle Production of Sputnik V in Vietnam
14:22 GMTMeadows Claims in New Book That Trump Tested Positive for COVID Days Before 2020 Debate With Biden
14:17 GMTUS State Secretary Blinken Delivers Remarks Following Meeting of NATO Foreign Ministers
13:46 GMT'I Thought I Was the Good Guy': First Video of Alleged Capitol Rioter FBI Interrogation Released
13:36 GMTStoltenberg Holds Final Press Conference Following NATO Foreign Ministers Meeting
13:16 GMT'Hands Everywhere': Epstein Accuser Testifies Maxwell Was Present When Pedophile Sexually Abused Her