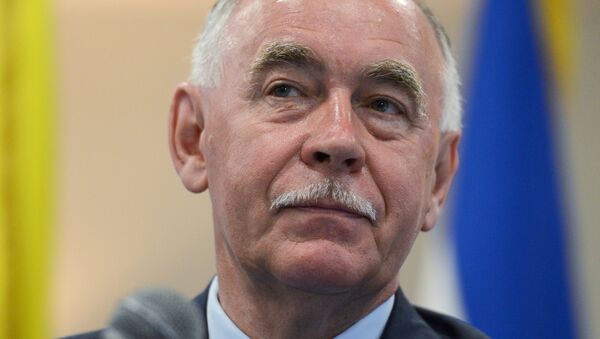 Viktor Ivanov was given a special award by the Jury of the international world-renowned Giuseppe Sciacca award.

ROME (Sputnik) — Director of the Federal Drug Control Service (FDCS) of Russia Viktor Ivanov was given a special award by the Jury of the international world-renowned Giuseppe Sciacca award on Saturday.

Ivanov was selected as an awardee for his work on the fight against drugs. "Viktor Ivanov heads the Russian Service for Drug Control, performing an efficient fight against organized crime, which not only leads to noticeable results in Russia, but is also an example for other countries," the Jury said in a statement.

Drug Trafficking Major Source of ISIL Income – Russian Drug Control Head
Ivanov thanked the Jury, citing prominent Russian philosopher Vladimir Solovyov, who said that the main goal of the state is not to "create paradise on earth, but prevent hell."

The Giuseppe Sciacca award was created in 2001 in Italy, and named after Giuseppe Sciacca, a young architecture student noted during his short life for his sporting activities and social concern. He died aged 26, following an accident when his parachute failed to open during celebrations in honor of the Blessed Virgin of Divine Love in Rome.

The international award recognizes the contributions made by people who have distinguished themselves in various fields of knowledge, art, social contribution. The award presupposes two categories — young scholars and special awards.

This year, a 10-years-old Spaniard, Carlos Perez Nawal, who is a wildlife photographer, became the overall winner.