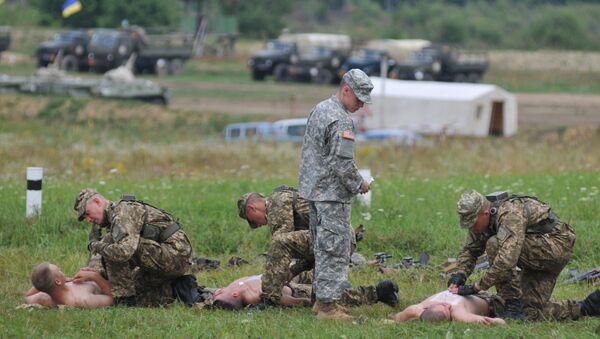 US-Ukraine Drills to Aggravate Donbass Conflict, Provoke Russia - Lawmaker
KIEV (Sputnik) – On April 20, the joint military drills kicked off in Ukraine's western Yavoriv training center in Lviv Region. The exercises were divided into three stages, each of which was dedicated to train the Ukrainian army to meet the NATO standards.

"The joint drills have shown their efficiency. This is another step to the NATO standards in Ukraine. We have made principally new changes in the model of Ukrainian National Guard's units battle training system following the drills," Lt. Gen. Mykola Balan, acting Ukrainian National Guard Commander, said during the closing ceremony, as quoted by the statement.

According to Balan, some 800 National Guard members participated in the Fearless Guardian drills.

Kiev is an active participant of joint military exercises with NATO states including the Saber Guardian/Rapid Trident-2015 and the naval drills Sea Breeze that took place earlier this year.