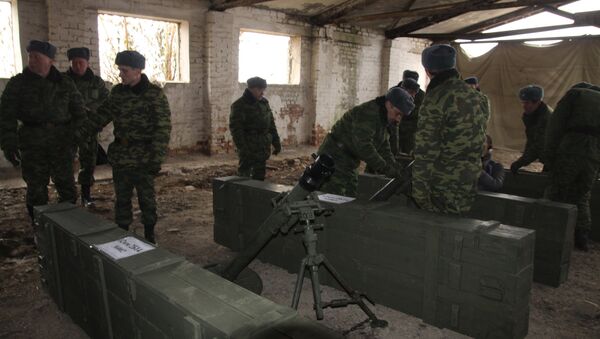 © Sputnik / Sergey Averin
/
Go to the photo bank
Subscribe
Kiev-led forces finished the withdrawal of weapons with less than 100 mm caliber in Donbass, according to a Ukrainian military spokesman.

Lugansk Republic Completes Weaponry Withdrawal From Line of Contact
KIEV (Sputnik) — The Kiev military has completed the withdrawal of weapons with less than 100 mm caliber in the eastern Ukrainian Donetsk region, a Ukrainian military spokesman said on Saturday.

Kiev-led forces withdrew mortars from Ukraine's eastern Lugansk Region in October. On Saturday, the Ukrainian forces announced they had began withdraw mortars on the Donetsk direction.

"It [the removal of mortars] has already been completed. We can say, the withdrawal has been finished by evening. It is complete in our [Donetsk] sector. It is yet unknown what shall follow, what kind orders will be given," Oleksandr Zavtonov told Ria Novosti.

Normandy Quartet Notes That Arms Withdrawal in Ukraine Proceeds on Time
Earlier in the day, the eastern Ukrainian self-proclaimed Lugansk People’s Republic (LPR) completed the withdrawal of weapons with less than 100 mm caliber from the contact line.

Southeastern Ukraine has been suffering from a crisis that emerged as a result of a military operation against local independence supporters, launched by Kiev authorities following a coup in April 2014.