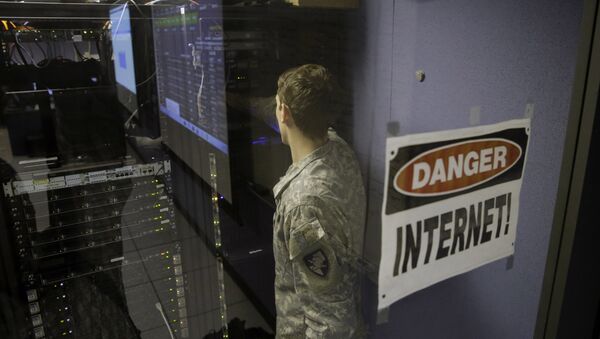 Major US defense contractors are competing for nearly a half-billion-dollar military contract on development of a computer code and cyber-weapons, which would be capable of harming humans in a real world.

The US troops may soon have the power to launch so-called logic bombs, instead of traditional explosive projectiles, these would essentially be able to direct an enemy’s critical infrastructure to self-destruct, likely with the loss of human life, according to Nextgov, a web-based information resource which reports on technology used by the US federal government.

Rise of the Machines: Robots, Cyborgs to Play First Fiddle in War of 2050
Computer code capable of killing adversaries is expected to be developed and deployed, if necessary, in the near future.

There is a special section of the manual, Cyber Operations, which explains the application of the Law of War to cyber operations.

That means that, just as with traditional bombs and weaponry, cyber-strikes will be allowed if they have a proper legal basis, in order not to violate jus ad bellum (Latin for “right to war”) prohibitions on the resort to force.

These are essentially the same rules as for attacks employing traditional bombs or bullets.

Web Wars: German Army to Enter Global Cyberwar – German Media
“Cyber operations may in certain circumstances constitute uses of force within the meaning of Article 2(4) of the Charter of the United Nations and customary international law,” reads the Law of War Manual. “For example, if cyber operations cause effects that, if caused by traditional physical means, would be regarded as a use of force under jus ad bellum (Latin for ‘right to war” criteria), then such cyber operations would likely also be regarded as a use of force.”

The manual goes on to give grim examples of what might constitute acceptable uses for cyber-weapons: trigger a nuclear plant meltdown; open a dam above a populated area, causing destruction; or disable air traffic control services, resulting in airplane crashes.

You Can't Win Them All: This Time US May Lose New Arms Race
Similarly, cyber operations that cripple a military’s logistics systems, and thus its ability to conduct and sustain military operations, might also be considered a use of force under jus ad bellum.

US Cyber Command (US CYBERCOM), responsible for the development of the deadly cyber weapons, is set to outsource to industry all command mission support activities, including “cyber fires” planning, as well as “cyberspace joint munitions” assessments.

Raytheon, Northrop Grumman and Lockheed Martin – major US defense contractors — are among the companies set to compete for a $460 million contract.