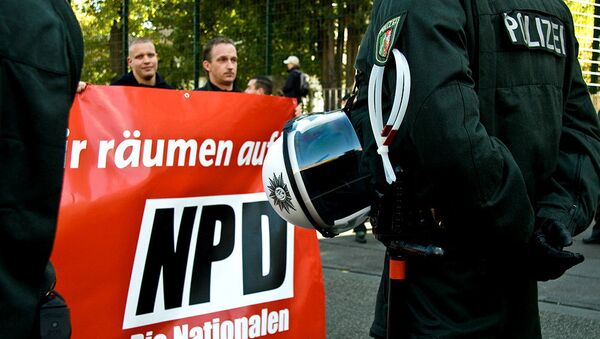 © Flickr / Tetedelacourse
Subscribe
The last three months have seen double the number of attacks against refugees’ and asylum seekers in Germany along with three times the assaults and bombings.

Attacks against refugee settlements reached 274 compared to 136 just three months ago, meaning the number has doubled in the third quarter of 2015, the "Saarbrücker Zeitung" newspaper revealed on Saturday.

Reports indicate Neo-Nazi organizations have been attracting significantly more followers, which has resulted in larger demonstrations. More than 5,800 people participated in anti-refugee demonstrations between July and September.

"Protests against refugees are now used by Nazis as a central theme to mobilize," German politician and Bundestag member Ursula Jelpke told journalists.

Demonstrations have included members from the National Democratic Party (NPD) and the Third Way but have excluded the anti-Islamization Pegida movement.

Germany Flip-Flops Over Crackdown on Syrian Refugees Amid Growing Pressure
The numbers provided only included attacks that have been reported so questions remain as to how many more attacks and demonstrations have not been accounted for, Jelpke said. Whether arson attacks were made against inhabited or uninhabited refugee houses and whether they were led by far-right protesters is still unclear.

The soaring number of protesters is explained by the estimated million asylum seekers fleeing from civil war in Syria expected to come to Germany by the end of the year.

September alone has witnessed 1,380 right-wing inspired crimes and 104 attacks all across Germany, according to Die Linke politician Petra Pau.

Some 203 anti-Semitic attacks have been registered between July and September, or nearly two per day.