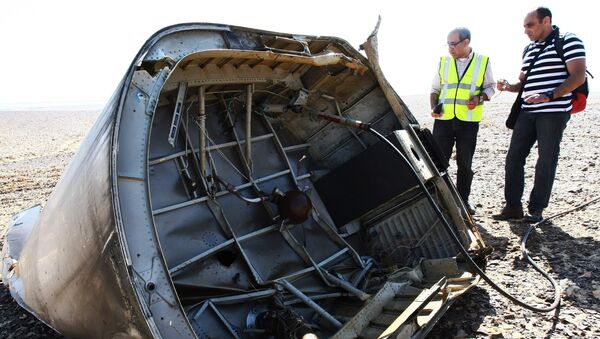 © Sputnik / Maxim Grigoryev
/
Go to the mediabank
Subscribe
International
India
Africa
The UK government has not shared its intelligence reports on the crash of the Russian aircraft A321 in Egypt's Sinai Peninsula with Russia, Kremlin spokesman Dmitry Peskov said Friday.

Africa
Egypt Suspends UK Airlines From Flying to Sharm El-Sheikh - EasyJet
MOSCOW (Sputnik) – On Thursday, UK Prime Minister David Cameron said it was "more likely than not" that the plane was brought down by a terrorist bomb.

"The British government has not shared the data. We do not know what data our British colleagues refer to," Peskov told journalists.

Russian Airbus A321 passenger plane crashed in Egypt’s Sinai Peninsula on October 31 while en route from Egypt’s resort city of Sharm el-Sheikh to St. Petersburg. All 224 people on board were killed. The crash has become the biggest tragedy in Russian and Soviet civil aviation history.